Susan Delacourt of the Toronto Star has the scoop on a new poll from Strategic Counsel. Game changer? Maybe. 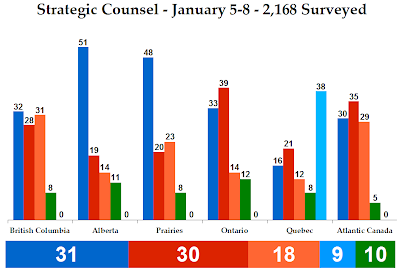 The Conservatives are down huge, to 31%. That is a loss of ten points since the last Strategic Counsel poll in October, and puts them in a statistical tie with the Liberals.

Interestingly, at 30% the Liberals aren't exactly reaping all the benefits. But with 30% they are doing better than they have recently. This is a big poll, and a result like this can't be ignored, particularly when the regionals have no significant anomaly.

The NDP is also doing well, at 18%. The Greens are at 10%, certainly not unreasonable.

The race is really close at both ends of the country. In British Columbia, all three parties are statistically tied, the Tories at 32%, the NDP at 31%, and the Liberals at 28%. In Atlantic Canada, the Liberals are back on top with 35%, followed by the Conservatives at 30% and the NDP at 29%.

The big story is in Ontario, where the Liberals are leading the Conservatives - and by a significant amount. They are at 39%, with the Tories at 33%. The NDP, though, is only at 14%.

The Prairie numbers are good for the Conservatives, but Alberta is not - considering the usual. At 51%, a few ridings begin to get competitive. 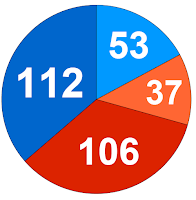 A tiny lead gives the Conservatives a minority government. But with such numbers it would be virtually impossible for Stephen Harper to remain as Prime Minister. The NDP maintains their current level, while the Bloc picks up a few.

The Liberal strength comes in Ontario, where they win 58 seats. The Conservatives are reduced to 36 in the province.

Clearly, and with the EKOS poll as back-up, the prorogation issue is having an effect. And, as the spokesperson from Strategic Counsel explains, the explanation for the prorogation coming from the Conservatives is extremely shaky. The big question is whether this will be a momentary dip, or whether this is something that could endure.

But, any way you look at it, that 5%-10% of Canadians have recently decided NOT to support the Conservatives cannot be a good thing for the party. It will take work to re-gain that support, since that 5%-10% likely makes up almost all of the on-the-fencers in Canada.

Of course, the terrible event in Haiti is much more important than this. Before the earthquake, Haiti was one of the most troubled countries in the world. For such a horrible natural disaster to take place in such a struggling country is just a catastrophe. The president of Haiti has already said the death toll could be six figures. Hopefully those still trapped will be saved and the country can begin to recover soon.
Posted by Éric at 3:31:00 PM