EKOS is back, with a vengeance. The Conservative lead has been reduced to almost five points, and they are polling at a level not seen since the heady days of late August. 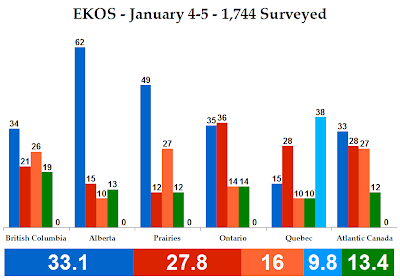 At 33.1%, this is the lowest the Conservatives have polled since an Angus-Reid poll of September 2. Has the proroguing of Parliament had an effect? This indicates that it has. The party is down 2.8 points since the last EKOS poll in mid-December.

The big story seems to be in Ontario, where the Conservatives are down four points to 35.4%. The Liberals have gained about five points and are at 36.0%. The Greens are also standing at better than the NDP, with 14.3% to 14.2%.

In Quebec, the Bloc is up one point to 38.2% while the Liberals are up three to 27.5%. The Conservatives seem to be floundering, down about two points to 14.6%.

In the Prairies, the Liberals have lost six points and are at a woeful 12.4%. The NDP was the beneficiary, with a gain of six points to reach 27.3%.

The race is getting close in Atlantic Canada, as the Conservatives are down about two to 32.6%, the Liberals down three to 28.4%, and the NDP relatively stable at 27.2%. 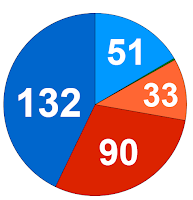 So, the Conservatives are moving back towards a 2006 electoral result, but the Liberals are still not in a strong position. The Greens, however, manage to elect Elizabeth May in British Columbia.

This is the first post-holidays poll that has been released. That time away from the news and with family, where politics are sometimes discussed, can have an effect on the polls. This is a big change. We will have to wait and see whether another pollster can confirm these results.
Posted by Éric at 8:58:00 AM