Time to look at December's polling. Four national polls were taken during this month (two fewer than last month), totalling about 10,200 interviews. Here are the results we get at the national level, with the difference from last month's average in brackets.

The Liberals, for once, are the big winners this month. They are the only party that has grown at the national level, jumping up two points. This gain seems to have come primarily from the Conservatives and the Greens. The Conservatives are only down half-a-point, but the Greens are down almost two. The current party standings are very close to the 2008 election results. They are also pretty close to the 2006 results. We're somewhere in between.

The Conservatives drop quite a bit, moving them below their 2008 electoral results and far from a majority. Both the Liberals and the New Democrats gain as compared to November, but the situation would still not be much different than it is right now. A result like this would be good enough for Jack Layton and Gilles Duceppe to stay as leaders of their parties, but one wonders whether Michael Ignatieff, with only a ten seat gain over Stephane Dion's result, and Stephen Harper, with fewer seats and another minority, would want to stick around. 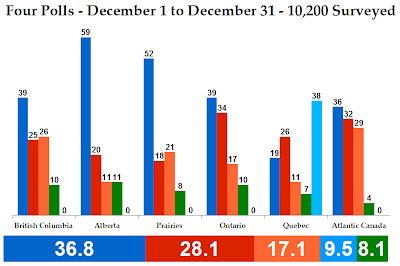 The Conservatives gain a teeny bit of ground, but it doesn't make up for the 2.7 points lost in November. The Liberals make a big jump, but are still behind the NDP. The Greens take a plunge, erasing the gains they made in November. The province is becoming a bit of a battle ground once again.

The Conservatives drop, but overall they're steady as they had gained a point in November. Most of that support has gone to the Liberals, as they are up quite a bit. The NDP is steady but is still behind the Greens, who have managed to hold on to a lot of their November gains.

The Conservatives are up almost a full point, and are comfortably over the psychological 50% milestone. The Liberals are also up, but still far too low overall. The NDP appears to be bleeding some support, but they are still in a decent second spot.

The Conservatives are down almost a full point, marking losses of more than three points over the last two months. They are still, however, in a very comfortable lead. The Liberals have another month of gain in the province, and are getting back to respectable levels of support. The NDP is down, but is still within range of where they want to be on election night. The Greens barely keep themselves in double-digits, which would be a moral victory for them.

The Bloc is very steady, as they have erased their small loss of November. The Liberals have recovered from November's losses, and are riding higher than their 2008 results. The Conservatives are down almost two entire points, and are dropping away from the 20% they need to be at. The NDP throws away most of the gains they made in November, but are still in a decent position (for them).

The Conservatives make some gains, and have a decent lead in the region. The Liberals are steady, which is a bad thing considering they lost more than four points in November. Their former, and sole remaining, "bastion" is now a troublesome region for the party. Not so for the NDP, who gain almost four points in the region. That marks a nearly eight point gain over two months. The NDP has real momentum in the region, and it would not be surprising to see them jump into second place in January. The Greens are down big. 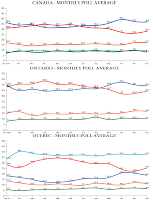 The Conservatives did not have a very good month, which isn't too surprising considering what was going on in December with the detainee issue. But, they had no big losses, nor any big gains, so it really was a relatively stable month for them, with a small down-tick. However, as they seem to have lost ground almost exclusively to the Liberals, that makes it a bad month.

The Liberals had a terrific month, considering how bad things have been going for them since September. They had gains in all regions except Atlantic Canada, where they were stable. And they had big gains in important places, like British Columbia, Ontario, and Quebec.

The NDP had a so-so month, with small gains in British Columbia and Alberta and small losses in Ontario and the Prairies. The bright spot is the steady improvement in Atlantic Canada.

The Bloc had another stable month in Quebec, while the Greens posted big losses in British Columbia and Atlantic Canada.

In short, 2010 begins with the same things we saw at the end of 2008. However, some potential story lines are emerging. The Liberals appear to be recovering in the battleground provinces of British Columbia, Ontario, and Quebec. The Conservatives still have a government-forming lead, but are showing signs of weakness, particularly in Quebec. The NDP is back to being competitive, and could make some noise in Atlantic Canada. The Bloc is not going away and the Greens aren't electing anyone.

Things should be relatively quiet until March, when Parliament resumes. There still could be some interesting political events, however. And things should ramp up very quickly after the Olympics, as some of the pundits are saying a Spring 2010 election is a distinct possibility. But, then again, a 2009 election was a distinct possibility. I was absolutely certain that we were going to the polls in October. I'm starting to believe that the various parties have realised it is easier to eat their hats for a little while rather than go back to the polls. It used to be that parties would go to any length to get an election (remember Cadman?). Now, they will go to any length to avoid one (proroguing, doing a 180 on basic principles). After five years, are politicians beginning to learn the tricks of a minority parliament?
Posted by Éric at 10:02:00 AM