EKOS has their weekly poll out, and it is another close one. 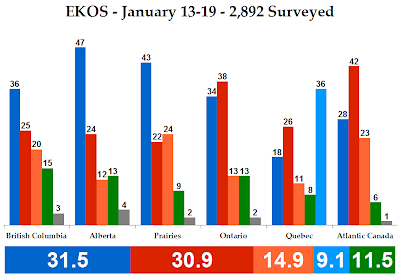 The NDP dropped 0.4 points to 14.9%, as did the Greens to 11.5%. While the two major parties have re-grouped over the past week, it seems the other parties are taking the brunt of those losses.

Another race is in Alberta, against all expectations. The Conservatives have dropped another four points to 47.2% while the Liberals are up five points to 23.9%. They'll sweep Edmonton! Maybe not, but that is a good score for the Liberals.

Nothing unexpected in the Prairies (the Liberals drop five, the NDP gain three and the Tories two) but the Liberals have maintained the lead in Ontario, 37.7% to 33.5%. That is about a three point gain for the Conservatives, and a one point loss for the Liberals. The NDP are down two points to 13.3%, tied with the Greens.

In Quebec, the Bloc drops five points but is still solidly in the lead at 36.0%. The Liberals are up three points to 25.5%, and the Conservatives are steady at 18.1%. However, all parties should be unhappy with these numbers.

Atlantic Canada gives us the most unlikely result, as the Liberals have gained nine points and stand at 41.8%. The Tories are down five to 28.0%, and the NDP is up one to 22.6%. 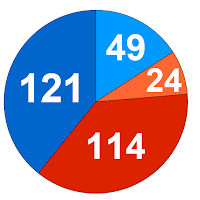 The government and the official opposition would be separated by only a few seats. For the Conservatives, 68 of their seats come from the West and North, while the Liberals have 77 of theirs in Ontario and Atlantic Canada.

This was a good poll for the Liberals, and only the Liberals. They are making gains, and have re-established leads in Ontario and Atlantic Canada. They are doing okay in Quebec and British Columbia, and very well in Alberta.

The Conservatives had a better poll than last week's, but they are still very low. Nothing to be happy about here - they're almost at their floor.

The NDP had bad results everywhere. When the Liberals were down and out, the NDP seemed like a potential alternative. Now that swing-voters have moved over to the Liberals, it seems that left-wing fence-sitters are moving back to the more-likely winner.
Posted by Éric at 8:26:00 AM