Léger Marketing has a new Quebec poll out. 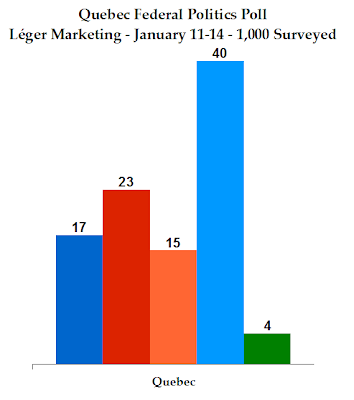 The last Léger poll was taken at the end of November. Since then, the Bloc and the Liberals have gained three points each. At 40% the Bloc is doing well, but the 23% of the Liberals is still too low.

The Conservatives drop three points to 17%, while the NDP drops two points to 15% and the Greens one point to 4%.

It is interesting to note that the Tories are making gains among this demographic. While that could be seen as positive, it actually gives them nothing. The West Island will not be voting blue (of any hue) anytime soon.

In and around Montreal, the Bloc has the lead with 36%. Most of that is undoubtedly from the eastern part of the island and area around it. The Liberals are at 27%, the NDP at 18% (good news for Thomas Mulcair), and the Conservatives are at 12%.

That 12% for the Conservatives would seem to indicate that any hopes of making in-roads in Montérégie are illusory. The 22% non-francophone vote seems to mean that most of that RMR Montreal support is coming from the barren political wasteland of the West Island.

The Tories are doing much better in the Quebec City region, where they are tied with the Bloc at 30%. Being tied, however, is good news for the Bloc. The NDP is surprisingly doing well in this region, at 20%. The Liberals have fallen off the face of the earth here with 14%.

Finally, in the "Rest of Quebec" category (which comprises a lot of the seats in the province), the Bloc is at no risk of losing ground. They lead this category with 48%, followed by the Liberals at 20% and the Conservatives at 18%. This would seem to put the Saguenay-Lac-St-Jean seats at play.

The poll also had some Quebec provincial political results, but I'll keep those (including a provincial seat projection) for tomorrow.
Posted by Éric at 8:47:00 AM