Ipsos-Reid has released a new poll, confirming some of the new story lines of 2010. There are some problems, however. 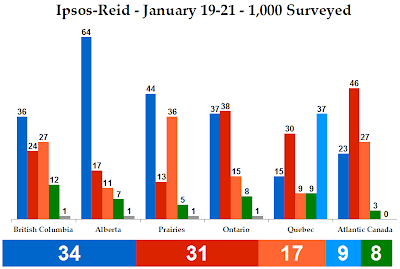 So, at 34% the Conservatives are polling at the higher end of what we've seen so far this year, while at 31% the Liberals are higher than they've been for quite some time. The 17% for the NDP is well within their norms. This marks a three point loss for the Tories since Ipsos-Reid's last poll at the end of November. It's a seven point gain for the Liberals, and a loss of two points each for the NDP and the Greens.

In Quebec, the Bloc is down only one point to 37%, while the Liberals make a big six-point gain and stand at 30%, very healthy. The Conservatives are down five points to a problematic 15%, and the NDP is down three points to 9%, also problematic.

British Columbia is showing what we've been seeing lately, namely that the Conservatives hold the lead but are relatively low for them, while the NDP and the Liberals duke it out for second. At 36%, the Tories have lost one point while the Liberals at 24% have gained seven points and the NDP at 27% has lost seven points.

We then run into problems in the Prairies and Atlantic Canada, which isn't surprising as the samples were about 60 people. In the Prairies, the NDP make a massive 21-point gain to reach 36%, while the Conservatives drop 12 points and the Liberals five. In Atlantic Canada, the Liberals make a similarly massive 22-point gain, while the Conservatives drop eight and the NDP drops three. The problem here is that the Greens have gone from 21% in November to 3% this time. So, in all likelihood, these numbers are relatively accurate while the November numbers were the problem.

So, contrary to public perception, the "Tim Horton's crowd" actually support the Liberals more than the Tories. And the NDP over-performs here. In other words, we can call Conservative supporters the "Starbucks crowd".

In fact, the Liberals have the most constant support level among the three income brackets, indicating they aren't the party of one particular class. 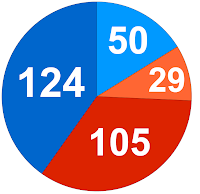 The Liberals make up for their shut-out in the Prairies by winning 44 seats in Quebec and Atlantic Canada. The Conservatives win 70 of their seats in the West and North. So, a similar result to the 2006 election.
Posted by Éric at 9:17:00 AM