Harris-Decima has a new poll out. 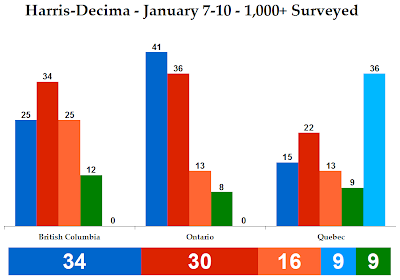 This is more or less in line with the numbers we've been seeing lately, but it should be noted that Harris-Decima has had smaller Conservative numbers throughout the last few months. In fact, the 34% result for the Tories is unchanged from HD's poll in December. The 30% Liberal result, however, is an improvement.

Only the details from Quebec, Ontario, and British Columbia were released. The BC result looks a little wonky, but if we take it in the context of the closer race other pollsters have shown, it isn't out of the question. The Liberals lead there with 34%, while the NDP and Conservatives are tied at 25%.

In Ontario, HD has the Conservatives at 41%, much higher than the other pollsters have shown. But at 36% the Liberals are still healthy. The NDP, at 13%, is not.

In Quebec, the Bloc leads with 36%, followed by the Liberals at a disappointing 22%. The Conservatives, too, are low with 15% and are statistically tied with the NDP at 13%.

This poll doesn't tell us anything new, but adds to the body of evidence that the political situation in Canada is closer than it has been since early September 2009.

I'll have a projection update as soon as we have a poll-less day.
Posted by Éric at 9:43:00 AM