Angus-Reid, not wanting to let EKOS have their way or give me a moment's rest, has released their latest poll. 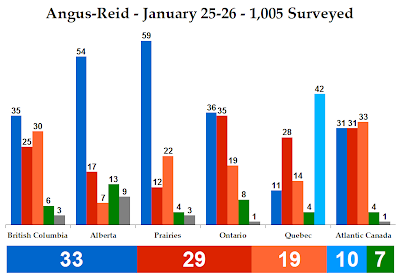 This one shows a larger margin between the Tories and the Liberals, as well as giving the Conservatives the lead. But, the poll is smaller and the margin of error larger, so this doesn't disprove the EKOS poll. What it does show is that the gap perceived by Angus-Reid is narrowing, as the Conservatives have dropped one point to 33% and the Liberals have gained one point to 29%, as compared with their January 12-13 poll. This is a good poll for the NDP, who are steady at 19%.

The Tories maintain a lead in Ontario, but lose one point to reach 36%. The Liberals have gained two points to reach 35%. The NDP drops three points to 19%.

British Columbia shows a close race, but the NDP is the big winner, up eight points to 30%. The Tories are down five to 35% and the Liberals are steady at 25%. 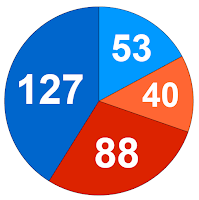 A very good result for the NDP. The Liberals suffer from weak results in the Prairies and Atlantic Canada.

The poll had some other notable questions. As to the question of prorogation, only 18% agree that it was a good idea. Fully 61% disagreed.