Ipsos-Reid has a newish poll out on Ontario politics. It was taken in mid-December, but is the most current provincial poll. 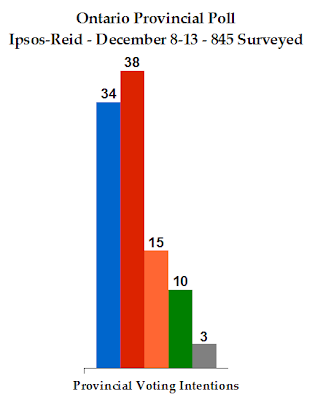 So, the Liberals under Dalton McGuinty hang on to a lead with 38% but, as Ipsos-Reid points out, that is seven points lower than where they were this time last year. The Progressive Conservatives are within striking distance, and the MOE, with 34%. The NDP is at 15% and the Greens are at 10%.

The Liberals lead in the GTA and in southwestern and northern Ontario. Their biggest number is in the GTA, where they lead with 45%.

The Progressive Conservatives under Tim Hudak lead in central and eastern Ontario. Their 45% in central Ontario is their best result.

The New Democrats do not lead in any part of the province, but have their best results (22%) in southwestern and northern Ontario.

The last poll that was released concerning this subject was by Angus-Reid at the end of November 2009. In that poll, the Progressive Conservatives were at 41% to the Liberals' 27%. Of course, at that time, the HST issue was tops. It could be that the results their methods provide are different, or it could be that people have lost a bit of their anger.

In any case, unlike the last go-around, the next election in Ontario should be hotly contested.
Posted by Éric at 11:55:00 AM