As usual, CROP has released new polling data to La Presse without making the full results available on their (rarely updated) website. Also, as usual, La Presse has not made the details available. However, unlike most media reports, there is enough here to do a full analysis and include it into the projection. 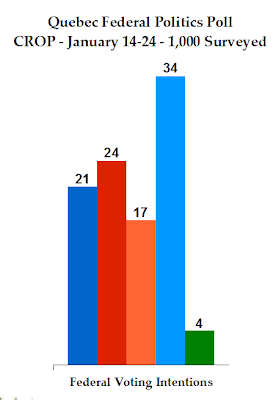 So, this poll has the Bloc a few points lower at 34%, though with the 3% MOE, and considering it is CROP, that isn't very significant.

The Liberals are low at 24%, however, and the Conservatives are high at 21%. But these are still not outside of what we've been seeing over the last few months. Oddly enough, while Ontario and Atlantic Canada are showing great movement, Quebec's voting intentions have hardly changed since last the spring of 2009.

At 17%, the NDP is flying high. Though CROP tends to put the NDP high at the expense of the Bloc.

The Green result wasn't reported, but only 4% remains so we'll assume that was their result.

In and around Montreal, the Bloc leads with 32%, followed closely by the Liberals at 30%.

In and around Quebec, unlike in the recent Léger poll, the Conservatives have a significant lead with 33%. The Bloc follows at 24% and the Liberals are third with 22%.

This poll tells us that not much has changed since the 2008 election. The NDP is showing strength, but they do not have the kind of regional strength that the Conservatives and Liberals have. This puts them in a good position to hold on to Outremont and maybe take a seat in the Outaouais, but nothing else. The Quebec City and ROQ results show that the Tories will be strong around the capital city and the Saguenay-Lac-St-Jean region. The Liberals look like they won't break-out off of the island of Montreal, while the Bloc is in a comfortable position to keep what they currently have.
Posted by Éric at 8:23:00 AM