EKOS has it Thursday poll out, and it is a doozy. 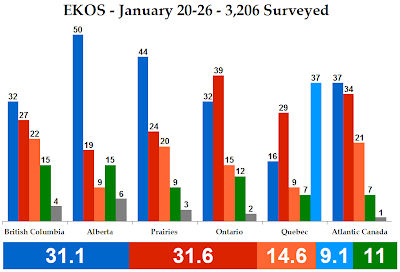 The Liberals are back in front, a position they haven't held since early September 2009. Obviously, this is a tiny, statistically insignificant lead, but it was only a few weeks ago that the margin between these two parties was in the double-digits.

Of course, 31.6% isn't exactly a strong mandate. But it is their best result so far in 2010 and represents a 0.7-point gain since EKOS's poll last week. At 31.1%, the Tories have to be near their floor, most likely represented by their 2004 electoral result. They're down 0.4 points.

It is interesting to look at the daily results. Prior to the weekend of January 23-24, the Tories were leading with an average of 32.3% to the Liberals' 30.4%. Following the weekend, when parliament would have begun sitting, the Liberals led with 32.7% to the Conservatives' 30.1%. The NDP also improved its score. A daily blip, or the start of a trend?

Ontario is showing a huge Liberal lead, 39.2% to 31.6%. But this is actually an indication of stabilisation, as the Liberals are up about a point and the Tories are down two. The NDP is up about two to 14.8%.

The Bloc gains about a point in Quebec to stand at 37%, while the Liberals gain about three points to reach 29.1%. That is a strong result for them. 16.2%, down about two points, is a weak result for the Tories.

British Columbia is showing a closing race, as the Tories have dropped about four points to 32.4%. The Liberals and NDP are up about two points, to 27.1% and 21.9%, respectively.

The other three areas do not have any big surprises, though the 6.4% "Other" result in Alberta is strange. In Atlantic Canada, the Tories and Liberals swapped about 8-9 points, likely a result of the smaller sample size. 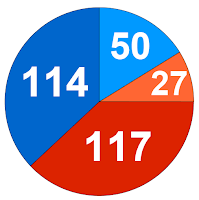 The Liberals re-gain the lead in seats, though it is marginal. With the tacit support of the NDP or the Bloc, an Ignatieff government would be safe.

Prorogation has to be the reason for this new trend. Harper has looked relatively good on the Haiti issue and in Davos, while the opposition is making political hay with the prorogation issue and nothing else. It will be very interesting to see if the numbers will continue to move in opposite directions.
Posted by Éric at 7:50:00 AM