Jack Layton, leader of the New Democrats, has been diagnosed with prostate cancer. He's got a good attitude about it and is optimistic. He's determined to beat it and I have no doubt that he will. I wish him all the best.

Jack Layton has been a very successful political leader, rescuing the NDP from its sorry days in the 1990s. I thought that now would be a good time to look at what Layton has accomplished in his seven years as leader of the NDP. 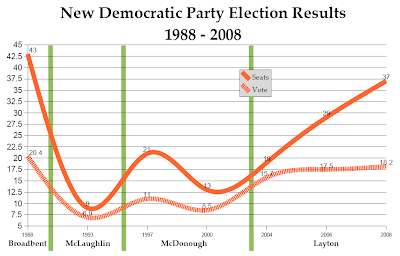 When Ed Broadbent stepped down as leader of the NDP in 1989, he did so at the height of his party's influence. The party earned 20.4% of the vote the previous year, and won 43 seats. That record has yet to be surpassed.

When Layton took the helm in 2003, he did so amid a good deal of excitement and optimism for the party's future. He didn't disappoint. In the 2004 election, he earned 15.7% of the vote (the most since the 1988 election) and 19 seats, almost as good as McDonough's 1997 success. He was one of the first leaders to figure out how to work in a minority parliament, winning concessions from Prime Minister Paul Martin in order to gain his support.

In the 2006 election, Layton had more success. He took home 17.5% of the vote and 29 seats, the most since the 1988 election. Despite his role as fourth in parliament, Layton had far more influence as an opposition leader, especially after Martin stepped down and the Liberals began their leadership race.

When Stéphane Dion took the helm of the Liberals, Layton really stepped forward and gained a lot of the spotlight. During the election, when Liberal numbers tanked, talk began of Layton as head of the opposition. The electoral result wasn't anywhere near what would have been needed for him to gain that title, but at 18.2% and 37 seats, Layton had pushed his party to heights that had only been seen before at the end of Broadbent's reign. He won seats in Newfoundland and Quebec, areas where the NDP had always struggled.

In December 2008, he was an inch away from doing something no other NDP leader had done: gained cabinet seats for the social democratic party.

Today, the party is polling badly when it is at 15% - an electoral result neither McLaughlin nor McDonough ever approached. There is a real possibility that the NDP could break the 40-seat, 20% barrier in the next election, matching Broadbent's historical-best 1988 result. That would be no small feat.

While Tommy Douglas is seen as the spiritual father of the party, Ed Broadbent has always been considered its most successful leader. Layton has yet to reach this level of success, but he is very close. Broadbent fought four elections from 1979 to 1988. Layton has fought three from 2004 to 2008. Here are their best results in each province. 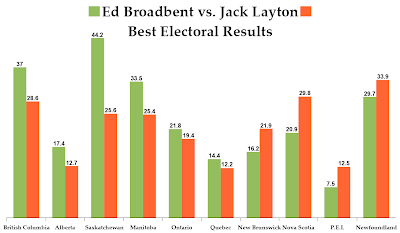 I suspect that after Layton beats this cancer, as I'm sure he will, he will be back on the political scene in strength, ready to lead his party into his fourth election, something only Douglas and Broadbent have done.
Posted by Éric at 3:04:00 PM