A new Harris-Decima poll is out, and it's tight. 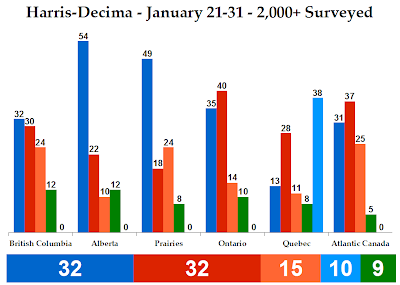 So, with a 2.2 margin-of-error, the Liberals and the Conservatives are tied at 32%. Compared to HD's January 7-10 poll, that is a two point swap between the Conservatives and Liberals to the benefit of the latter. The NDP drop one point to 15% while the Greens remain steady a 9%.

The most significant change in this poll is in Ontario, where the Liberals gain four points. They're up to 40%, while the Conservatives are down six points to 35%. The NDP gains one point to reach 14%, which is slightly problematic for them.

In Quebec, the Bloc is ensconced with 38%, up two points from the last poll. The Liberals are securely in second with 28% (up six) while the Conservatives are down two points to a woeful 13%. The NDP drops two to 11%. The Tories are now down to pre-2006 levels - troubling. 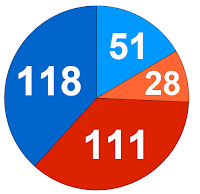 The reason for the Conservative lead is due to their strong results in the West (65 seats), particularly in the Prairies and Alberta, but also because they are still in the game in Ontario, where they take 40 seats. Their 12 seats in Quebec and Atlantic Canada, however, are a big reason why they have barely enough seats to eke out the Liberals - though, of course, this would be an almost impossible Parliament for Stephen Harper to run.

This poll, while confirming Conservative weakness in Ontario and Quebec, and to a lesser extent British Columbia, also shows that the Liberals are on their way up. They seem to be gaining ground, though much more slowly than the Conservatives have lost it. This could be a positive thing for them, as violent swings in support are more fickle than slow, progressive gains.
Posted by Éric at 5:43:00 PM