Time to look at January's polling. Eleven national polls were taken during this month (seven more than last month), totalling about 20,310 interviews. Here are the results we get at the national level, with the difference from last month's average in brackets.

The Conservatives make a big 4.4-point drop, while the Liberals gain two points. That marks a four point gain for the Liberals over December and January. The NDP has dropped almost an entire point, while the Bloc Quebecois is unchanged. The Greens are up 1.8 points, almost exactly the amount they dropped in December. 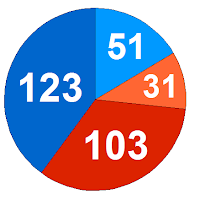 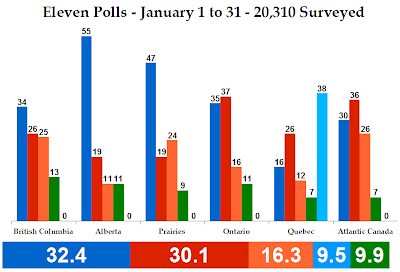 This is a big drop for the Tories. The Liberals make a small gain, but more importantly move into second place in the province. The NDP drops a little. The Greens make a big jump, but it is actually equal to the losses the party sustained in December.

This is another month of losses for the Conservatives, though they are still very comfortably ahead. The Liberals falter a little, but at this level they are in play in Edmonton. The Greens manage to maintain their (artificially?) high level of support, while the NDP can't seem to gain any ground.

The Conservatives are down big in the Prairies, dropping well below the 50% mark. The NDP benefit, moving solidly into second. The Liberals make a modest gain, as do the Greens.

The Liberals gain almost three points, marking gains of almost five points over the last two months. They've opened up a nice little lead over the Conservatives. Dropping four points in Ontario, both because of its importance and the large sample size, is disastrous for the Tories. The NDP also takes a step back, while the Greens make a small step forward.

The Bloc is as steady as can be, and has been for months now. The Liberals make a statistically insignificant gain, but being steady at better-than-Dion numbers is good enough. The Conservatives make a big drop, marking almost five points of losses over the last two months. They are in trouble. The NDP makes a nice little gain, but it more or less makes up for the losses in December.

That is a big drop for the Conservatives, but they were flying a little high in Atlantic Canada anyway. The Liberals take advantage of it, gaining four points and the lead. The NDP take a step backwards, but the Greens take a small step forwards. 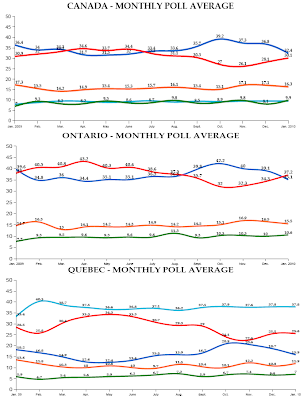 This was a very, very bad month for the Conservatives. They dropped in every region and their smallest drop was still almost three points. They were down big in Quebec, Ontario, and British Columbia - places they need to be doing better.

By comparison, it was a good month for the Liberals. They are up in five of six regions, though for the most part their gains were relatively small. But being up almost three points in Ontario, four points in Atlantic Canada, and one point in British Columbia is good news.

It was a mixed month for the NDP, up in three regions and down in three. But the movement wasn't drastic, and gains were made in Quebec and the Prairies, which are good regions for the NDP. But losses in Atlantic Canada, Ontario, and British Columbia are worrisome.

The Bloc is steady, which is good. The Conservatives are dropping, which means the Bloc stands a good chance of taking back a few seats around Quebec City and in the Saguenay.

There is some talk that the current trend is not exactly a reversal or a major shift, but that the wide gap that formed in the fall of 2009 was the anomaly. I'm starting to think that is true, as for most of 2009 we were looking at a close race. We got so used to double-digit gaps in September through to December that we forgot how close the race was for the rest of the year. Are things resetting?
Posted by Éric at 8:40:00 AM