A new Harris-Decima poll for your consumption. 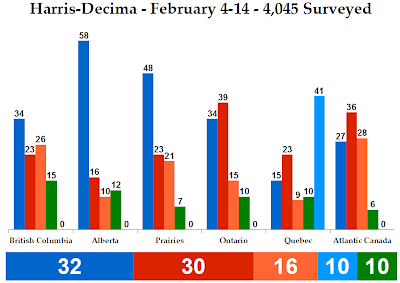 Of note, the Conservatives have maintained their national position of 32% since HD's end-of-January poll, while the Liberals have dropped two points to 30%. The NDP is up one, the Bloc is steady, and the Greens are up one. 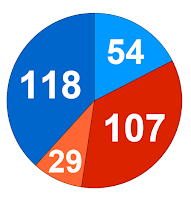 That might not be enough for the Tories to form government for any long period of time. They take 68 seats in the West and North, 38 in Ontario, five in Quebec, and seven in Atlantic Canada.

The NDP win 12 in the West, 12 in Ontario, and five in Atlantic Canada.

The Bloc dominates in Quebec with 54 seats.

A few words about the Olympics. The Conservatives have wagered that Canadians will come out of the Olympics glowing, and that some of that glow will rub off on the government. I've been watching a lot of the Olympics, and I don't feel more Tory.

But I don't think this theory will turn out to be true. In the anglophone media, there is a lot of talk about the failings of these games. The weather, the death of an athlete, and an Opening Ceremonies full of mistakes and odd-choices (let's have the torch-bearer in a pick-up truck!) has been getting a lot of coverage, especially since Canadians haven't been winning a lot of medals out of the gate.

Canadian athletes are supposed to win most of their medals nearer to the end of the Games, so it is possible that a lot of these negatives vibes will have worn off by then. It is quite likely that in English Canada, Canadian gold will out-shine the failings of the Olympics thus far.

But in French Canada, opinion may have soured too much, and the Olympics will only push more voters towards the Bloc Quebecois and away from the government.

NON-POLITICAL! As some of you may know by now, I'm a big hockey fan. I've really been looking forward to the hockey tournament in Vancouver. I work from home, so I don't have to miss the afternoon games, and I can stay up to catch a little of the midnight (EST) game before going to bed.

The United States beat Switzerland 3-1 yesterday, a closer score than most people expected. The Americans came out of the gate a little confused, and the Swiss team (who have played together longer) started out well. I think the Swiss could be dangerous - I don't expect them to beat Canada but they will give them a challenge. Only Mark Streit and Jonas Hiller are regular NHLers, but Yannick Weber is a good Montreal prospect, and the Swiss league is no beer league. Andres Ambuhl plays in the AHL, and guys like Martin Pluss, Ivo Ruthemann, and Sandy Jeannin have been good players in the Swiss league. The US team is a little young. They have a few great players (Zach Parise and Patrick Kane, for example) but most of the line-up is made up of great second-line NHLers, and great second-or-third defensemen. Canada shouldn't have too much trouble with them.

They certainly didn't have much trouble with the Norwegians. Here again, the patched-together Canadian team was a little out-of-step in the first period, and the Norwegians played them to a 0-0 draw after the first 20 minutes. But, it took a lot out of the Norwegians to play at that tempo, and they lost a step or three for the rest of the game. Obviously, the NHLers had no trouble keeping up the high rate of play for the full 60 minutes. The Norwegian team is not as bad as the score would have you think. Ole-Kristian Tollefsen is a marginal NHL player, but Patrick Thoresen was a decent one and has been lighting up the KHL. Per-Age Skroder and Mats Zuccarello Aasen are very good players in the Swedish Elitserien, probably the third-best league in the world. Pal Grotnes played great, but it made sense to pull him after four goals and save him for the Swiss and American games, where they have a better chance of an upset. The Canadian team looked great, and shouldn't have any trouble topping the group. They won 8-0.

Finally, I caught the first period of the Russia-Latvia game. In the end, the Russians won 8-2. They look really good. They were buzzing around the net, and setting up some really good plays. The KHLers showed they are just as good as the NHLers, with Alexander Radulov and Danis Zaripov scoring early. But when you have Ilya Kovalchuk, Alexander Ovechkin, and Evgeni Malkin on your team, goals coming from other lines is just gravy. The Latvians were surprisingly spunky, though they only have a handful of NHLers and AHLers in the line-up. Most of the team, however, plays for Dinamo Riga in the KHL, so it gives them the intangible benefit of familiarity. They might have been good enough to surprise someone and advance, if they weren't in such a tough group with Russia, the Czechs, and the Slovaks.
Posted by Éric at 9:20:00 AM