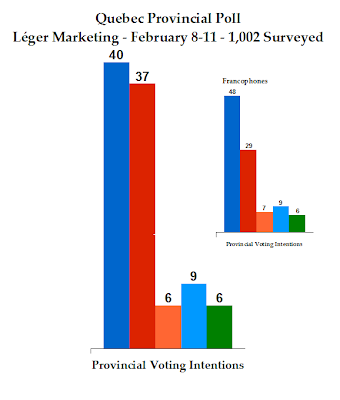 The Parti Québécois and Liberals remain neck-and-neck, but the PQ retains the edge. The ADQ is actually up a few points, but still at a very low 9%.

Jean Charest is the favourite for premier with 28%, though Pauline Marois is not far behind with 24%. Amir Khadir (one of the leaders of Québec Solidaire) and Gérard Deltell (leader of the ADQ) are tied with 7%.

The provincial political landscape is still very tight, and the ADQ is still out of it. I project that with this poll the PQ would form a majority government of 66 seats. The PLQ would win 55 and the ADQ and QS would win two seats each.

Léger also has another poll concerning sovereignty and Lucien Bouchard's recent comments. While it isn't surprising that a majority are more concerned with the economy than sovereignty right now, the support for independence is actually quite high.

Though Léger lists support for independence at 42%, I believe the actual result is 44%. Everywhere in the report they list the OUI respondents as 231 out of 522 total respondents, which corresponds to 44%. I'm not sure why they have it at 42%.

For the federal scene, the only thing we can take from this is that the PQ and the BQ are running equal to one another, which has not always been the case. And compared to Léger's federal poll, we can extrapolate that the Bloc does still have some room for growth.
Posted by Éric at 10:33:00 AM