Léger Marketing has released a new Quebec poll, inquiring into federal and provincial voting intentions. I'll have a post up about the provincial results within the next few days. 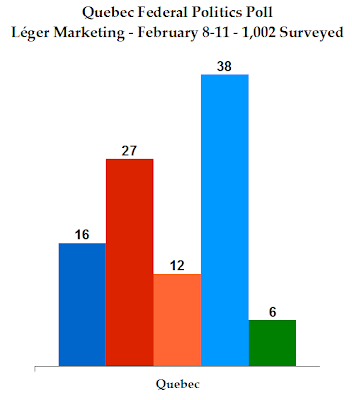 Not too many surprises, but these polls are fun because they have breakdowns for Montreal and Quebec City.

Compared to Léger's poll in mid-January, the Bloc is down two points to 38%. They are still well ahead of the Liberals, however, who are at 27% (a gain of four points). The Conservatives are down one point to 16%, while the NDP is down three to 12%.

In and around Montreal, the Bloc leads with 36%. Most of that support comes from the eastern part of the island and north and south of it. The Liberals are at 31%, and the NDP is at 15%, demonstrating Thomas Mulcair does have a chance to keep his seat.

In Quebec City, the Conservatives poll surprisingly high, with 32%. That is a good result for them, meaning they could be able to keep all of their seats around the Vieille Capitale. The Bloc will make a fight of it, though, with 29%. Considering the MOE, the parties are neck-and-neck. The Liberals are at 19%.

The Bloc is well ahead in the "rest of Quebec", with 43%. The Liberals follow with 26%. The Conservatives are at 15%, low for them. This indicates that while their bridgehead around the capital is safe, the seats on the periphery and in the Outaouais may not be. 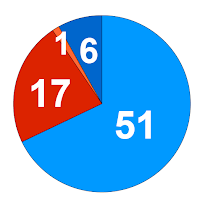 The Bloc would win 51 seats with this poll, taking advantage of the weakness of the Conservatives outside of Quebec City. The Liberals win 17 seats, taking a couple on the island and perhaps in the Outaouais or Montérégie. The Conservatives are reduced to six seats, while the NDP keeps Outremont.

This only serves to further confirm the new reality in Quebec: the Bloc is safe, the Liberals are strong, and the Tories are not.
Posted by Éric at 1:34:00 PM