Environics conducted a poll for The Marshall Plan, and the full details have been made available through Scott's Diatribes. 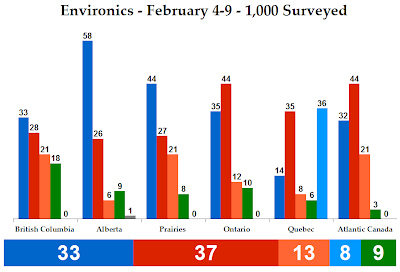 This result is quite different from the other polls we've seen. It doesn't help that Environics hasn't released a poll for quite some time, the last being from mid-October. That poll, however, showed a huge gap between the Tories and the Liberals: 38% to 26%. So, it is remarkable that Environics would find such a swing in support.

At 37%, this is the highest result we've seen for the Liberals for a very long time. The 33% Conservative result, however, is not out of the ordinary. The 13% for the NDP is a little low.

Regionally, the Liberals have a big 44% result in Ontario, though the Conservatives aren't doing horribly at 35%.

In Quebec, the Liberals are at 35% - huge - while the Bloc is at 36%. The Conservatives are struggling, as is the NDP.

The BC numbers align with what we've been seeing, with 33% for the Tories and 28% for the Liberals. At 18%, the Greens are riding high. 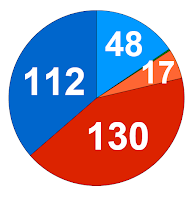 So, a minority government for the Liberals, a strong opposition for the Conservatives, and disastrous showing for the NDP.

Obviously, when we see a poll that is out of the ordinary, we can't help but be suspicious. However, there aren't any especially odd regional results, so we'll just have to see what other pollsters report.
Posted by Éric at 2:11:00 PM