EKOS has its weekly poll out, and it shows some movement. 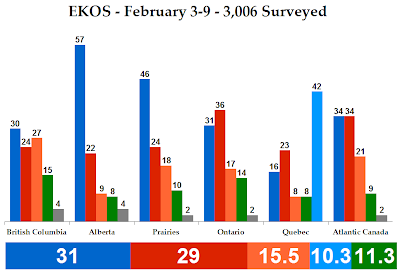 For one party, at least. The Conservatives stay put at 31%, but that is good enough to give them a two point lead, as the Liberals drop 2.9 points down to 29%.

The NDP only gain 0.1 points to reach 15.5%, while the Greens gain 0.4 points. The Bloc Quebecois jumps 2.1 points nationally, as they gain about seven points in Quebec.

Where is this Liberal drop coming from? Well, primarily in the three largest provinces. In Ontario, the Liberals drop about five points and are at 36.2%. That is still good enough to give them a 5.2-point lead over the Conservatives, who are at 31%. In Quebec, the Liberals drop four points, and are at 23.1%. And in British Columbia, the party dropped four points, but at 24.1% are still doing alright.

The Conservatives were stable in BC, which is bad news at 30.3%. They made gains in Alberta and the Prairies, but dropped one point in Ontario and two in Quebec, where they are down to 16%.

As said, the Bloc is up seven points to 41.7% - an almost 20-point gap between them and the Liberals. 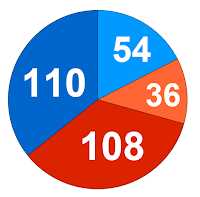 So, that's pretty close. Weak results in BC, Ontario, and Quebec are to blame for the narrow gap despite the two-point national spread.

EKOS also asked when people want an election. They had the silly options of "as soon as possible", "within the next four months", "before the end of 2010", and "at the end of the four year term in 2012". Those are silly because the two first ones are almost the same, and the difference between a June election (four months from now) and a September election (seven months from now), is negligible.

EKOS also had the "second choice" question, which I love.

Conservative supporters were the most dedicated (or most partisan, depending on how you want to look at it), with 51.6% saying they had no second choice. The next most popular option for them are the Liberals, with 21.1%.

Liberals are a bit more willing to consider other options, with 34.7% saying they'd vote NDP. But 26.1% said they would not vote for anyone else.

The NDP showed a similar spread, with 37.4% choosing the Liberals and 22.7% choosing no one.

And, most interestingly, 30.8% of supporters of the "Other" parties have no second choice, while 22.6% choose the Greens. This indicates they are contrarians.

This poll is demonstrating that the Liberals might have swung a little above their weight, and are starting to fade again. But the Conservatives did not make any steps forward. They are still well behind in Ontario, polling badly in Quebec, and flooring in British Columbia.

Next week's EKOS poll will hopefully give us a good indication of what's going on.
Posted by Éric at 8:52:00 AM