Environics has released a new poll, showing a closer race than the recent EKOS poll. 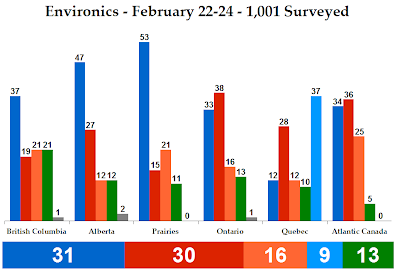 UPDATE: Comparing this to Environic's February 4-9 poll, we actually see a lot of movement. The Liberals have lost seven points while the Tories are down two. Those go to the Greens (up four) and the NDP (up three). Rarely do we see so much movement between one poll and the next by one pollster, which leads one to believe that the results of one or the other (or both) were somewhere near the outside of the MOE.

In Quebec, the Bloc Quebecois has a good lead with 37% (up one) to the Liberals' 28% (down seven). The Conservatives are at a dismal 12% (down two), though that same number for the NDP is strong (and up four).

In British Columbia, the Conservatives are doing better with 37% (up four), while the NDP and Greens are tied at 21% (only a three point gain for the Greens) and the Liberals are at 19% (down nine). A little odd, but this is a relatively smaller poll.

The Alberta numbers show a little of the MOE as well, with the Liberals at 27%. To be fair, though, this is only up one from the month's earlier poll. What we do know is that they are doing well in the province anyway. 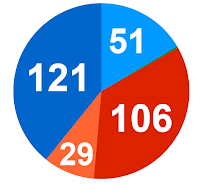 The Conservatives would win 121 seats with this poll, 73 of them out West. Only 36 come from Ontario, 3 from Quebec, and 9 from Atlantic Canada.

Another data-point, but this one shows a closer race. There is a lot of variation between this poll and the one by Environic's earlier this month, which leads one to believe that a lot of this movement is due to the MOE.

Note: like EKOS, Environics prompts the party names. Unlike EKOS, they don't prompt for "Other". This clearly makes a difference.
Posted by Éric at 10:28:00 AM