EKOS has their weekly poll out today. Nothing majorly different from last week's, but that alone is news. 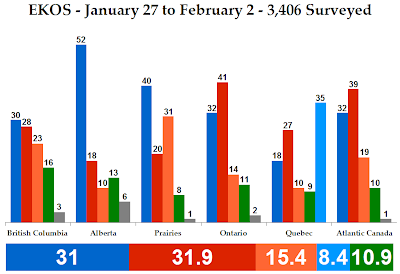 The Liberals gain 0.3 points from last week, and are within an inch of 32%. The Conservatives only lose 0.1 points and stand at 31%. Statistically insignificant gains and losses, yes, but with a sample of 3,406 it isn't as insignificant as it appears.

Let's start with Ontario, where things are stable. The Liberals make a small two point gain, while the Conservatives remain stable. But now that the gap is 40.6% to 32.4%, being stable is not good news for Stephen Harper.

In Quebec, the Tories are showing a little life with a two point gain. They are still only at 18%, however. The Liberals lose two points, as does the Bloc.

In British Columbia, the Conservatives are really starting to sink, dropping two points to reach 30.4%. The Liberals and NDP make tiny gains, and stand at 27.6% and 23.0%, respectively. The Greens are at 16.4%, which means Elizabeth May could be in the race. 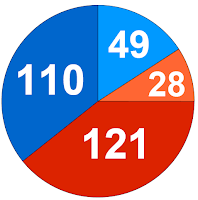 The Liberals move into government with the help of 62 Ontario MPs. They also win 21 in Atlantic Canada, 19 in Quebec, and 12 in British Columbia. The Tories only elect 32 Ontario MPs, and their 16 in BC and 20 in the Prairies hurt them as well. Twenty of the NDP's MPs are from British Columbia and Ontario.

So! What does this poll say. Not too much, except that the close race between the Liberals and Conservatives is solidifying. And as the Conservatives have gained in only two regions, compared to three for the Liberals, the Grits have the advantage. The NDP is slowly being pushed aside as the Liberals have re-gained some anti-Tory credibility.
Posted by Éric at 9:07:00 AM