The new EKOS poll shows that things aren't changing too much, as both major parties make modest gains. But the Tory lead is starting to strengthen. 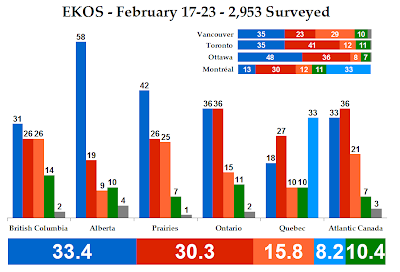 So, a little life by both the Liberals and the Conservatives.

In Ontario, both the Liberals and Conservatives are up about a point, but the Liberals maintain the slimmest of leads (36.2% to 36.0%). The NDP is stable.

In Quebec, the Bloc Quebecois drops three points to 33%. The Liberals gain two and are at 27.4%. The Conservatives also gain two, but are still low at 18.2%.

In British Columbia, the Conservatives gain one but are still struggling at 31.3%. The Liberals lose three and the NDP gains two, putting them at a tie at 26.4%.

In the smaller regions, no real surprises. The Conservatives are up six in Alberta, the Liberals are up seven in the Prairies, and the NDP loses four points to the Conservatives in Atlantic Canada.

Toronto doesn't show much movement (Tories up two, Liberals down one, NDP down two), and neither does Montreal (Liberals up three, Conservatives and NDP down one, and Bloc down two). 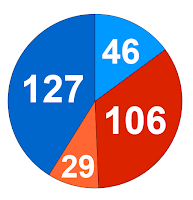 The Conservatives would win 127 seats with this poll, 63 of them out West, 46 in Ontario, 9 in Quebec, and 9 in Atlantic Canada.

The Liberals would win 106 seats, 19 of them in the West (note, for future reference, that the North is included in this "West), 48 in Ontario, 20 in Quebec, and 19 in Atlantic Canada.

The Bloc wins 46 seats, while the Greens are shut out again.

Nothing much new in this poll, though one thing it indicates is that the Conservative drop has likely ended, and we will probably see their numbers rebound a little. However, I don't think we will return to the double-digit leads.
Posted by Éric at 8:46:00 AM