Angus-Reid has a new poll out, showing a little Conservative strength. 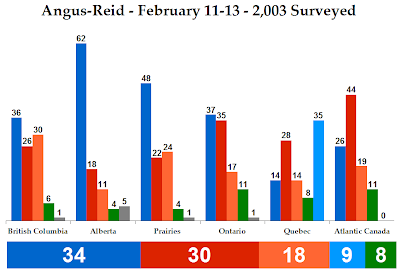 However, it must be pointed out that compared to Angus-Reid's January 25-26 poll, not much has changed. Both the Conservatives and Liberals have gained one point, pushing each up to 34% and 30%, respectively. The NDP is down one point o 18%, and the Greens are up one point to 8%.

The regional results don't show much movement either. The Conservatives gain one point in Ontario and are at 37%. The Liberals remain stable at 35%, and the NDP drops two to 17%.

In Quebec, the Bloc drops seven points to 35%, but everyone else is within the MOE. The Conservatives gain three points and are at 14%, while the Liberals and NDP remain stable at 28% and 14%, respectively. 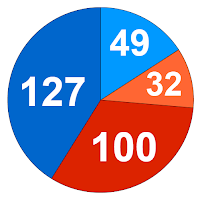 Conservative strength comes, as usual, out west, where they win 66 seats. But they also take 49 in Ontario. However, they are reduced to only five in Quebec.

The Liberals take 43 seats in Ontario, 23 in Atlantic Canada, and 19 in Quebec. Fifteen seats come in the west and north.

The NDP takes most of its seats in British Columbia (11) and Ontario (14).

The Bloc remains well ahead in Quebec, with 49 seats. They took full advantage of the Conservative drop.

What this says is that Conservative supporters want their party to win a majority, while the Liberals have room to grow among non-supporters.
Posted by Éric at 10:00:00 AM