Another incumbent victory, but Vancouver isn't attached to status quo

Gregor Robertson continued the winning ways of Canada’s incumbents over the weekend, being re-elected as Vancouver’s mayor.

Mr. Robertson captured 53 per cent of votes cast and all seven of his Vision Vancouver Party candidates won their council seats, with the remaining three going to opposition parties.

After the federal Conservative victory in May and the re-election of sitting governments in Prince Edward Island, Manitoba, Ontario, Newfoundland and Labrador, and Saskatchewan this fall, Gregor Robertson makes it 7-0 for incumbents in major elections in 2011.

But the thirst for the status quo is not ubiquitous among Vancouverites. Not even a fresh take on the party in charge has improved the fortunes of the governing B.C. Liberals.

But to switch over to the other side of the country, Léger Marketing has some new federal numbers out for Quebec today. They show that the New Democrats are losing a little bit of their shine in Quebec, echoing the drop in support that Harris-Decima and Ipsos-Reid identified earlier this month. 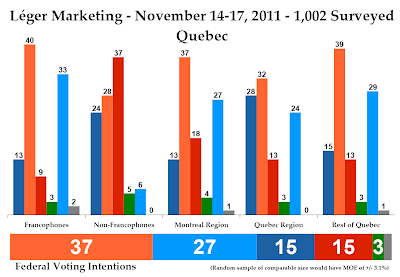 Léger was last in the field between October 11 and 12, and since then the NDP has dropped six points to 37%. The Bloc Québécois has taken advantage and is up six points to 27%, the narrowest gap between the two parties since the May election.

The Liberals are up four points to 15%, while the Conservatives are down four points to 15%. Some of the follow-up questions Léger asked concerning unilingual auditors general and the long gun registry give an idea of why the Tories might have slipped in Quebec.

With these numbers, the New Democrats would still hold on to most of their seats but more than a few are held by tiny margins. The NDP would win 54 seats, with eight apiece going to the Bloc Québécois and the Liberals and five to the Conservatives.

As the Bloc is also in the midst of a leadership race, the absence of a New Democratic leader cannot entirely explain why the NDP appears to be bleeding support to the Bloc. Undoubtedly, the choice of leader for the NDP will play a big role in determining whether the New Democrats can get themselves back over 40% support in Quebec, but the four months or so where the Bloc will have a leader and the NDP will not could be very important.

The Liberals still seem to be very solid among non-francophone Quebecers and the Conservatives are competitive in Quebec City, meaning the two parties are still in a strong position to fight for their fortresses. It does not seem unlikely that the NDP may have peaked in Quebec with 59 seats. The boundary re-distribution could become very significant going into the 2015 election, though, as there are many close NDP/Liberal ridings in Montreal, NDP/Conservative ridings in Quebec City, and NDP/Bloc ridings in the rest of Quebec.
Posted by Éric at 9:47:00 AM