The Saskatchewan Party under Brad Wall will win a majority of the 58 seats up for grabs tonight, while Dwain Lingenfelter's New Democrats will form the Official Opposition. It is no gamble to make either of these statements, as no other party is likely to win a single seat and there is virtually no chance that the NDP will overtake the SP in tonight's vote. What is unknown, however, is how large the NDP opposition will be.

Forum Research released a poll yesterday that indicates the New Democrats might form a larger opposition than some had feared. While the gap is still enormous (28 points), it is far from the 40 point gap that some polls taken at the end of October suggested.

With this poll included in the model, ThreeHundredEight projects that the Saskatchewan Party will win a larger majority government than what they had at dissolution. 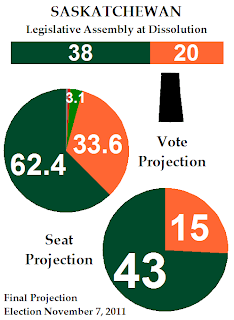 ThreeHundredEight projects that the Saskatchewan Party will win 62.4% of the vote tonight, with the New Democrats taking 33.6% and the Greens 3.1%. The Liberals, Progressive Conservatives, and Western Independence Party will take the remaining share of the vote.

The New Democrats are projected to win six in Regina, five in Saskatoon, three in northern Saskatchewan, and one in the south.

With the addition of the new Forum poll, the number of close ranges has been reduced. The Saskatchewan Party leads in three close races and trails in one, giving them a range of between 40 and 44 seats. The New Democrats have a range of between 14 and 18 seats.

However, one of the problems with the projections this fall has been the need for a regional model. This proved to be the case in Prince Edward Island, Ontario, and Newfoundland and Labrador. It could very well prove to be the case as well tonight in Saskatchewan.

Forum Research indicates that the Saskatchewan Party leads the NDP in Regina and Saskatoon with about 58% to the NDP's 37%. In the 2007 election, the two parties were very close in Saskatoon but the NDP had a 12 point edge in Regina.

So if we take the numbers from Forum Research for Regina and Saskatoon and apply them to the model, we get a different result.

Not in Saskatoon, however. Even with Forum's numbers, the SP is still projected to win seven seats in Saskatoon with the NDP taking the remaining five. It increases the number of close races, though, with three NDP seats being considered close.

In Regina, on the other hand, it changes things radically. From five seats, the SP is bumped up to nine, with the NDP reduced to only two seats in Regina. 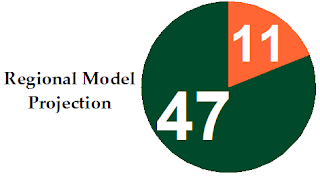 This regional model projection is based solely on Forum's numbers, however. A fully operational regional model would make a vote projection for the two main cities that would be based on all available data. So, it isn't the "official" projection but acts instead as another plausible result of tonight's vote.

We don't have a whole lot to go on. While four polls were released during the campaign, which is quite good for a relatively small province, most of them were taken in the last week of October, making most of the data more than a week old going into the election. Forum's data is much newer, and perhaps is an indication that in this final week some Saskatchewanians have recoiled from the idea of a virtual SP sweep. 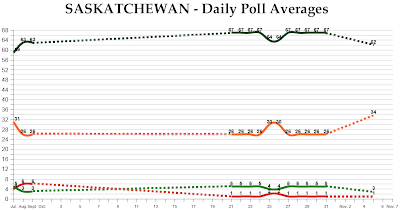 That is what this chart indicates, at least. The Saskatchewan Party has been coasting pretty well since August, but this latest set of numbers from Forum is the best result we've seen from the NDP in this campaign. It could be a factor of the poll's margin of error, but it does seem to suggest that the race has turned into less of a landslide in the final days. We saw something like this in Prince Edward Island, where voters apparently decided that having no real opposition would not be a desirable outcome. We shall see.

What will determine the size of the NDP opposition tonight will be the results in Regina. If Forum has it accurate, and NDP support has dropped by a significant amount in the city (with virtually all of the old Liberal support going to the Saskatchewan Party), they could be in for a very rough night. If they hold tough in the provincial capital, I think they should comfortably keep themselves in the double-digits. Historic bests and worsts are still possible for both Brad Wall and Dwain Lingenfelter, but if the race has narrowed slightly we might be looking at more of a repeat of the 2007 election, with SP gains in Saskatoon and Regina.
Posted by Éric at 10:09:00 AM