Conservatives back to minority territory

On Monday, Nanos Research released its latest federal poll for The Globe and Mail and CTV. Though the poll shows very little real change from their last set of numbers at the end of September and beginning of October, the Conservatives now seem to be in minority territory once again. 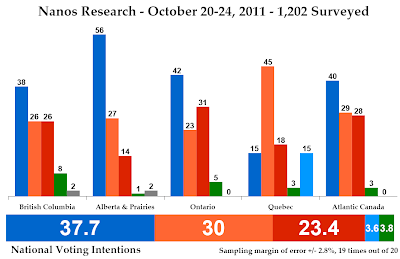 Nationally, the Conservatives are down 1.3 points to 37.7% and are trailed by the New Democrats, who are up one point to 30%.

None of these shifts are statistically significant.

There has been little real change at the regional level. In Ontario, the Conservatives lead with 42.4%, while the Liberals stand at 30.5% and the NDP at 22.5%.

These two sets of numbers are actually quite good for the Liberals. Being over 30% in Ontario makes them competitive in a lot of ridings, while being at 18% in Quebec makes them the major opposition to the New Democrats, whose numbers in Ontario seem stuck. 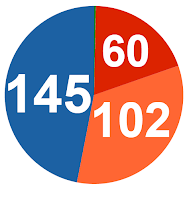 In our current 308-seat legislature, these numbers would result in a minority for the Conservatives with 145 seats, down 21 from their current standings in the House of Commons. The New Democrats would be unchanged at 102 seats, while the Liberals would be up 26 to 60 seats. The Greens would hold one seat.

The Conservatives would win 18 seats in British Columbia, 27 in Alberta, 19 in the Prairies, 61 in Ontario, four in Quebec, 15 in Atlantic Canada, and one in the north. In a 338-seat legislature, I estimate they would win three extra seats in British Columbia, six in Alberta, and nine in Ontario, giving them a total of 163. But, of course, with the new seats comes new boundaries, so it is impossible to forecast with any great confidence what would happen after re-distribution.

The New Democrats would win 10 seats in British Columbia, one in Alberta, six in the Prairies, 18 in Ontario, 60 in Quebec, six in Atlantic Canada, and one in the north. With the extra seats, I estimate them at 109 seats, with two each in BC and Ontario and three extra seats in Quebec.

So, the re-jigging of the House will make things more comfortable for the Conservatives. Instead of being 10 seats short of a majority, they would be six. At least in this poll, the Liberals are a real factor. The NDP would be unable to form a government without them and if the parties co-operated the Liberals would hold 37% of the seats in the 174-seat government in the 338-seat legislature. That's enough to give them real clout, and maybe nine or ten ministers in cabinet.

Of course, this is all hypothetical. Four years and a seat re-distribution will change things. But it is interesting that the Conservatives appear to have gotten their majority at exactly the right time.
Posted by Éric at 11:53:00 AM