Saskatchewan will be voting on Monday and the polls indicate Brad Wall's Saskatchewan Party will be re-elected. But will the results in the Prairie province have any reverberations in Ottawa?

Though Saskatchewan has only 14 seats in the House of Commons, it could be an important battleground in 2015.

If the next federal election becomes a showdown between the Conservatives and the New Democrats, Saskatchewan will be one of the provinces the NDP will be targeting for gains.

Also out today is a new poll by Praxis Analytics for the Saskatoon StarPhoenix and the Regina Leader-Post.

I won't be doing an update for the Saskatchewan projection today. It will go up on Sunday, and I'll do a final projection on Monday, the day of the vote. But we can look at the poll in the meantime. 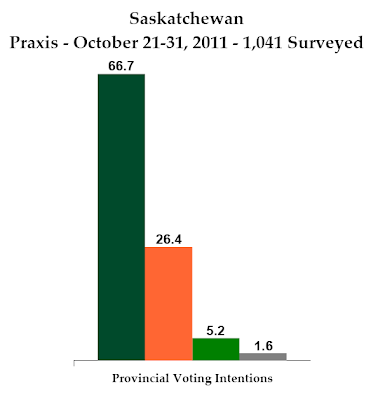 Praxis was last in the field between August 23 and September 5. They use both online and telephone methods to compile their data.

The Liberals, who are only running nine candidates in this election, have accordingly dropped about five points. It appears that their support has split pretty evenly between the Saskatchewan Party and the Greens. I would have expected the NDP to pick up some of that support, but according to the poll the New Democrats are a party more people would specifically not vote for than the Saskatchewan Party.

These are, undoubtedly, dispiriting numbers for the New Democrats. With the other polls that have come out in this campaign, the NDP has been at or over 30%, and you have to think that is a psychological barrier they'd like to be over on election night.

I imagine turnout will be an important factor. It was pretty good in 2007 at about 76%, but that was an election in which the NDP government was defeated. Now, with the Sask. Party holding an insurmountable lead, people might not be very motivated to go out and vote. Will voters take the Sask. Party win for granted and stay home? And if so, will that benefit the obvious winner or the underdog? 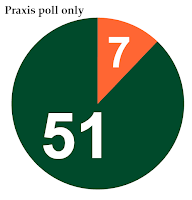 Using the results from the Praxis Analytics poll only, ThreeHundredEight projects the Saskatchewan Party will win 51 seats on Monday night, with the New Democrats only winning seven.

But this is not the "official" projection. As mentioned, check back for that on Monday.

If this ends up being the result, this will be the NDP's worst performance in its history since its first election in 1934 under the CCF banner. For the Saskatchewan Party, it would be double what they won in their first election in 1999 and the highest proportion of seats that the conservative option has ever taken in Saskatchewan. The Progressive Conservatives won 55 seats in a 64-seat legislature in 1982, the equivalent of 50 seats in a 58-seat legislature.

That the Saskatchewan Party will win a crushing majority victory on Monday night is obvious, but the fate of the NDP is still up in the air. The potential for a catastrophe exists, but there is also a good chance that the NDP will hold firm in their strongholds and manage to elect over 10 MLAs. This will be the big question on election night.
Posted by Éric at 9:41:00 AM