Jean-François Fortin has moved into second in the Bloc Québécois endorsement race, but Daniel Paillé stays in front thanks to the support of four-term MP André Bellavance.

Meanwhile, the addition of union support into the endorsement rankings has inflated Peggy Nash's numbers, though she still ranks third.

As always, right-click and open the leadership charts below in a new window in order to magnify them.

With the addition of several former MPs and a swathe of Parti Québécois MNAs (primarily from eastern Quebec, provided to me by the Fortin campaign), Fortin now has 34.5 points in the endorsement ranking (36.7% of all available points) and has vaulted ahead of Maria Mourani, who has fallen to 20.7% of the total.

But Daniel Paillé is still leading, thanks to the support of Bellavance. Paillé now has 40 points, or 42.6% of the total. This indicates a first ballot win for Paillé is no sure bet.

For the New Democrats, there have been no new endorsements but what has changed is the addition of union support.

Unions make up an important part of the NDP's support base, and many union members are also members of the NDP. Though unions won't have a set portion of the ballot as they did in 2003, their influence will nevertheless be important.

After looking into the 2009 Ontario NDP race, I've decided to award 0.06 points to every 1,000 members of a union that is endorsing a candidate. I'll get into why I did that a little further on in the post.

But thanks to this addition to the rankings, Peggy Nash is now in a far more impressive third place.

There have been no other major changes. Robert Chisholm, Nathan Cullen, Paul Dewar, and Niki Ashton all have between 10 and 15 points, putting them at between 2.4% and 3.5% of the total.

Now why the need for a change? First, let's look at how the endorsement system would work for the three most recent provincial NDP races. For the purposes of these races, I have treated MLAs and MPPs the same way as I do MPs.

Let's start with British Columbia, which is the most problematic (especially for the BC Liberal leadership race). 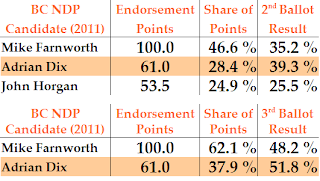 I jumped ahead to the second ballot as Dana Larsen had no endorsements and so dropping him off the first ballot made no difference.

As you can see, Mike Farnworth was the favourite to win. He actually was during the campaign as well. He had more caucus and federal support than either Adrian Dix or John Horgan, which led to him being favoured in the endorsement rankings. Nevertheless, the final result on the third ballot was close.

The Manitoba leadership race, however, worked much better with this system.

Greg Selinger had, by far, more support within the Manitoba NDP caucus than did Ashton, and the system overstates his support. But it does see him winning easily on the first ballot - thanks in part to the support of CUPE Manitoba.

In Ontario, both Gilles Bisson and Andrea Horwath had some union support, while Peter Tabuns had the support of Ed Broadbent. In the end, it seems that union support tipped the scales in Horwath's favour, as well as her good support within the caucus. 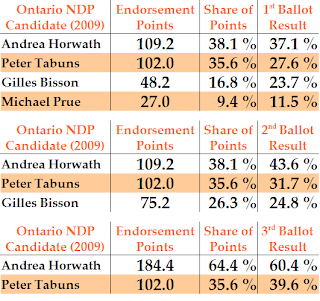 Going through the permutations found that 0.06 points per 1,000 union members yielded the best result. At 0.05 points per 1,000, Tabuns still would have led on the first ballot.

The chart on the left lays out the points system, and now includes union support. Obviously, this is really only an important factor for the New Democrats (though the FTQ could get involved in the Bloc race). I think it will help the rankings and they look, to me, pretty plausible. But the caveats described in the first post on the endorsement ranking system still apply - especially since the NDP and Bloc will be using a OMOV system, meaning the results in December and March could look very different.
Posted by Éric at 11:26:00 AM