Though the Coalition Avenir Québec (CAQ) was officially launched as a political party only two weeks ago, it would virtually sweep the province of Quebec if an election were held today – but only if Gilles Duceppe stays on the sidelines.

Quebec is the place to be in Canadian politics right now. In addition to the CAQ, there is Jean-Martin Aussant's Option Nationale that could be a nuisance for the Parti Québécois as well. The political geography of Quebec could be very, very different after the next election.

Or, it could revert to type and François Legault's experiment will fall flat on its face. Most pundits out of Quebec do find it somewhat puzzling that Legault is so popular. He is not known for having much charisma, and he is only a few years removed from the PQ. And then there is the Gilles Duceppe factor, who would win a majority according to my projections based on CROP's numbers, seven months after voters rejected him at the polls. It is a bit of a head-scratcher.

In the Globe piece I averaged the Léger and CROP polls. Here's the full breakdown of this averaging: 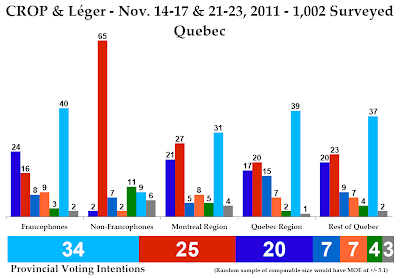 The colour chosen in this graph (and future graphs) for the CAQ is based on the dominant colour of their logo. With the PQ, the ADQ, and now ON there is a lot of blue in Quebec politics.

But for Jean Charest and Pauline Marois, it's just the blues. Sorry.

These are the first real poll results including the CAQ, so it is a very interesting starting point. Note that the CAQ is strongest around Quebec City and outside of the two main urban centres. It's the same problem the ADQ had. Also note that the CAQ is not having any traction among non-francophones. The Liberals still own that vote.

What's most exciting is that this Globe article features the first projection by the new projection model for Quebec. The model is regional, using the data from the CROP and Léger polls to make projections based on regional support in Montreal RMR, Quebec RMR, and the rest of the province. Thankfully, and I confirmed it, both CROP and Léger use the same regional breakdown for their polls.

But how to include the CAQ? That is a bit of a trickier affair, as we have nothing to base their support upon. If they end up merging with the ADQ, the easiest thing would likely be to use the ADQ's support as the base. But in the meantime, the regional support levels are being applied uniformly throughout each region, with small variations based on the shifting support of the other parties. Quite interestingly, the CAQ's regional support in each riding usually fills the empty space created by proportionately dropping the support of the other parties almost perfectly.

After using this system, I noticed that the CAQ was winning some ridings in Montreal from the Liberals that just seemed unnatural. So, a first for ThreeHundredEight, the projection model in Quebec is also taking into account the linguistic profile of some ridings.

In any riding that has a disproportionately high percentage of non-francophones, the CAQ's support is determined by their support among the two linguistic groups. This means that in the West Island, particularly in ridings where non-francophones make up the vast majority of the population, the CAQ is not projected to do very well. Without using these linguistic profiles (and Elections Quebec has a wonderful amount of data on the population profiles of ridings in the province), the Liberals lose a lot of ridings that they simply won't lose.

What's great about this new model is that it allows me to use every scrap of data that can be pulled from a Quebec provincial poll. If an ADQ-CAQ merger is on the books I'll need to do some re-jigging, but I think the model should provide a very good guide of the likely outcome of the next election.
Posted by Éric at 11:02:00 AM