If an election were held today, the Conservatives would probably lose their majority in the House of Commons. But the New Democrats would not be much closer to replacing them.

Two polls released over the last few days by Ipsos-Reid and Harris-Decima show small shifts in support from the May 2 election, but not enough to completely overturn the results. A Conservative slip of between three and four points, however, puts them solidly in minority territory.

The national results of these two polls are strikingly similar, a difference of no more than two points for any of the main parties. The regional results are slightly more different, so I invite you to check them out in the article and the reports on the Ipsos-Reid and Harris-Decima numbers.

Turning these polls into seats also doesn't make a huge difference, both putting the Conservatives in a minority. But there are enough changes around the margins to make them interesting. 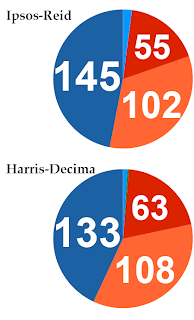 In the Ipsos-Reid poll, the Conservatives would win 145 seats, with 102 going to the NDP and 55 to the Liberals. The Bloc Québécois would also win six seats.

In the Harris-Decima poll, the Conservatives win 133 seats, with 108 going to the NDP and 63 to the Liberals. The Bloc wins three and the Greens one.

If we take the best and worst results for each party in each region and combine them, we get some interesting seat ranges.

It is worth noting that in both the Ipsos-Reid and Harris-Decima scenarios the Liberals and NDP are able to command a majority of seats in the House on their own. It also worth noting how the NDP range spans only 20 seats, while that of the Tories spans 26 seats and that of the Liberals 34. The NDP seems a bit better placed to hold what they have.

Some interesting results, but the first person who comments that this doesn't matter as the next election is four years away loses.
Posted by Éric at 1:55:00 PM