Six months after the federal election

Despite changes in leadership for three of the four opposition parties, the federal voting intentions of Canadians have shifted very little since they cast their ballots six months ago. But contrary to some of the expectations immediately after the results of the federal election became known, the New Democrats are proving to be no flash in the pan.

And the Conservatives may have peaked at the right time. 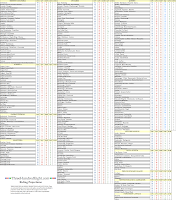 If you click on the image to the left you can see the full riding breakdown of this projection, based on the current 308 electoral boundaries.

One of the major shifts is in Saskatchewan, where the New Democrats win a handful of seats. It is a province in which they have historically done well, and it is one of the places where the NDP is likely to make gains in 2015 if they manage to improve their standings in the House of Commons.

Now to something completely different.

Le Nouvelliste, the major newspaper serving Trois-Rivières and the surrounding region, commissioned a poll by Segma Recherche on the voting intentions of Quebecers in Trois-Rivières and Shawinigan. These two cities touch five provincial ridings in the Mauricie: Trois-Rivières, Champlain, and Maskinongé for the former and Laviolette and Saint-Maurice for the latter.

Segma included François Legault's CAQ in the mix, and it gives an idea of how Legault's new party may perform in, at least, the Mauricie. This is not a bad region for the CAQ, considering it has voted for the ADQ in the past. But the poll shows how messy the next election in Quebec could be. 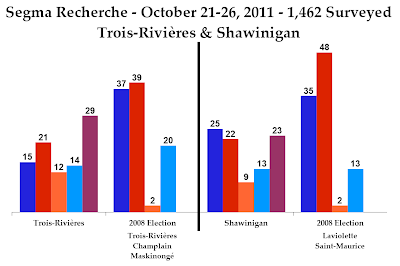 For comparison, I calculated the vote each party received in these five ridings in the 2008 election.

In the three ridings in Trois-Rivières, the Liberals and Parti Québécois were very close, and indeed the Liberals hold two of the ridings and the PQ the other.

But with Legault's CAQ on the ballot, his party would take the plurality of votes with 29%. The Liberals would drop to 21% and the PQ to only 15%, barely ahead of the ADQ. Also remarkable is the 12% that Québec Solidaire scores, after taking only 2% in the region in 2008.

That the CAQ would win the region with only 29% shows how divided the Quebec electorate currently is. This is not exactly enthusiastic support for Legault, but he could win all three ridings in Trois-Rivières nevertheless.

The Parti Québécois is now narrowly ahead in the city with 25%, but considering the margin of error we're looking at a virtual three-way tie with the CAQ (23%) and the Liberals (22%). The ADQ has held on to its support, while QS is up to 9% in the region.

This means that we would be likely to see a party win one or both ridings in Shawinigan with less than 30% of the vote. Theoretically, the PQ could win them both with only 25% in each riding! For a projection model, this is a nightmare as we could see these kinds of three-way ties across the province.

Mauricie has only five ridings, so it isn't exactly a live-or-die battleground, but this regional poll shows how much trouble the PQ and the Liberals will be in once Legault's party is launched. The Parti Québécois is already being pressed by Québec Solidaire, and with Legault taking a big chunk of their vote as well it isn't impossible that we would see the FPTP system work against the PQ in the worst possible way. Remember that the Bloc Québécois took 23% of the vote in the last federal election, but still won fewer seats than both the Conservatives (17% and five seats) and the Liberals (14% and seven seats). If the splits worked against the PQ in a similar way, we could easily see them reduced to a half-dozen seats in the 125-seat assembly despite taking even a quarter of the popular vote.

But for political junkies like us, it is all very exciting. Quebec is the major political theatre right now and is likely to continue to be so for at least another year. The paperwork has been filed for the launch of the CAQ, and the Option Nationale of Jean-Martin Aussant has already been registered. I don't imagine his party will catch fire, but his party could easily be one of seven that is likely to take at least 2% of the vote in the next election: we have the Liberals, the PQ, the ADQ, Québec Solidaire, the Greens, Legault's CAQ, and now Aussant's Option Nationale. It's getting crowded!
Posted by Éric at 10:16:00 AM