BC Liberals fall as BC Tories rise

Late last week, Angus-Reid released a new poll for British Columbia, a province currently in flux. We've already seen that the BC New Democrats have supplanted the BC Liberals in the most recent Ipsos-Reid poll, but Angus-Reid shows how the rise of the BC Conservatives has eaten into their support. 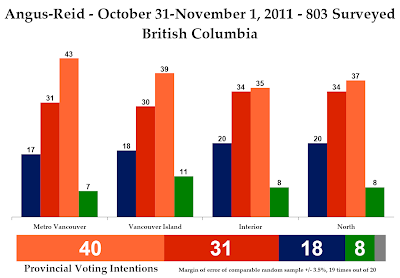 The last poll from Angus-Reid for British Columbia was released in March of this year, and since then the NDP has hardly moved, gaining an insignificant two points to stand at 40% support.

But the BC Liberals have dropped 12 points since then, and now trail with 31% support.

The big beneficiary has been the Conservatives, who are up 13 points to 18%.

That the Conservative gain almost mirrors the Liberal loss exactly is no accident. Fully 21% of British Columbians who voted Liberal in 2009 have switched over to the Conservatives, according to this Angus-Reid poll.

But there is an oddity in the numbers, an oddity that was also present in Ipsos-Reid's poll. Though Adrian Dix's NDP have a lead over the Liberals, he personally trails Christy Clark on the leadership question. While 25% of people say she is the best person to be premier, only 19% say the same for Dix. While the NDP leader has a lot of time to turn his personal numbers around, it would be problematic to enter into a campaign with this kind of gap.

Regionally, the New Democrats are leading across the board, with important margins in Metro Vancouver (43% to 31%) and on Vancouver Island (39% to 30%). It is much closer in the Interior and the North, but having more widespread support is good news for the NDP, as they usually trail the Liberals in some parts of the province when they lead in others.

The strength of the Conservatives is remarkable, hovering between 17% and 20% throughout the province. Could they come in a strong second or third in every riding without winning one? It's possible, but it seems that the Conservatives stand a good chance of electing a few MLAs.

The projection model for British Columbia is not fully calibrated to take the presence of the Tories into account, but it is a rudimentary regional model. It will be improved and perfected as we approach the 2013 election. 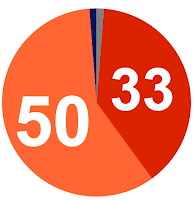 But in its current form, the BC New Democrats would win a majority government with Angus-Reid's poll, taking 50 seats and leaving 33 for the BC Liberals. One independent and one BC Conservative MLA are also sent to Victoria.

The New Democrats take 27 seats in Metro Vancouver, 10 on Vancouver Island, nine in the Interior, and four in the North.

The Liberals take 13 seats in Metro Vancouver, 12 in the Interior, four on Vancouver Island, and four in the North.

When you see numbers like this, you understand why Clark decided against an election this year. She said her own numbers put the two parties closer together, and perhaps they did at the time, but it seems confirmed that the New Democrats currently hold a statistically significant lead in British Columbia.

The one intangible, however, is the performance of the BC Conservatives. Is it a flash in the pan? Will it hold in a campaign if it looks like the BC New Democrats might be elected? That the NDP is leading is good news for them, but that they are leading with 40% is not a sign that they would be elected with any great enthusiasm.
Posted by Éric at 9:55:00 AM