Keystone, Alberta, and the NDP

The NDP's concerns over the Keystone XL pipeline are not likely to make the party many new friends in Alberta.

But are the New Democrats writing off the province, or speaking for an unrepresented portion of the population?

Alberta isn't the most exciting political battlefield in Canada - actually, it is probably the least. But with the New Democrats poised to be the main alternative in 2015 and with the party already occupying one seat in the province, Alberta could be a bit more interesting in four years' time. 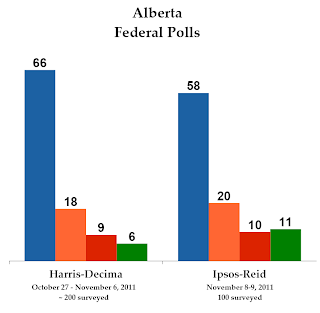 Harris-Decima and Ipsos-Reid were the two polling firms to report so far in November, and their Alberta results overlap each other taking into account the margin of error. Though the Conservatives are, in these polls, somewhere between 58% and 66%, their lead is clear and the effect on their electability in its 28 (or, soon, 34) ridings is not changed either way.

But for the other parties it is pretty consistent. The New Democrats have around 19% support in Alberta while the Liberals are between 9% and 10%. Green support is harder to peg, but it is likely closer to Harris-Decima's result than Ipsos-Reid's.

It is interesting to note that prior to the 2011 federal election this was the sort of breakdown we often saw, but with the Liberals in the place of the NDP. They've swapped in Alberta, like they have done in several other parts of the country.

But what would it take for the New Democrats to win a second seat in Alberta in its current 28-seat make-up? Let's play around with the projection model to find out.

The Conservatives only took less than 50% support in two of the 27 seats they won, so the likelihood of some combination of opposition parties winning a big swathe of seats from the Tories in Alberta is very low. What needs to change?

What about a third? Edmonton Centre becomes winnable for the NDP at 32% provincial support, pushing the Liberals to a bare 3% and the Greens to 2%. A fourth seat, Lethbridge, falls in the NDP column when the party reaches 35%, with the Conservatives still at 62% and the Liberals and Greens at 1.5% and 0.5% apiece.

So, it is plainly obvious how far we are from more than two seats voting anything but Conservative in Alberta. The new boundaries could change things, though, depending on how Edmonton's seats are re-distributed.
Posted by Éric at 8:38:00 AM