There wasn't a lot of polling done at the federal level in October, with two national polls (both from Nanos Research) and two Quebec polls released during the month. But altogether, these four polls surveyed 4,416 people. 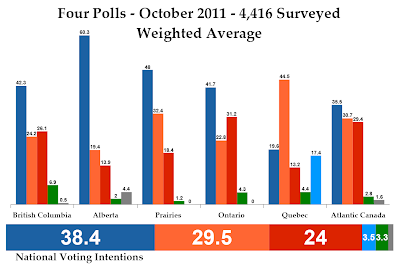 The Conservatives averaged 38.4% support in October, down 0.7 points from September.

The New Democrats averaged 29.5% support, down two points, while the Liberals were up 4.5 points to 24%.

For the Liberals, that is their high watermark since the May election.

The Bloc Québécois averaged 3.5% support nationally, while the Greens were down 1.3 points to 3.3%.

The Conservatives gained 3.3 points in British Columbia and averaged 42.3% in October, well ahead of the Liberals (up 7.2 points to 26.1%) and the New Democrats (down 9.6 points to 24.2%). The Greens were down 0.4 points to 6.9%. This Liberal gain and NDP drop is quite dramatic, and reverses what had been the state of affairs since April. It is something to keep an eye on. 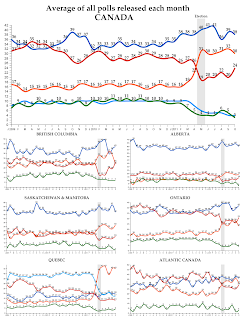 Ontario is the major reason for the national Liberal gain, as they are up 5.6 points to 31.2% in the province. The Conservatives still lead, gaining 2.4 points to hit 41.7%, but the New Democrats are down 5.6 points to 22.8% support. This is the lowest NDP monthly average in Ontario since April, and the best performance by the Liberals since then. Another province to keep an eye on. 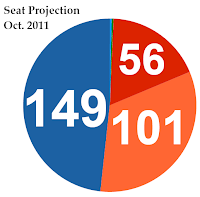 With these numbers, the Conservatives would win a minority of the seats in the current House of Commons with 149. The New Democrats would win 101 and the Liberals 56, with one seat apiece for the Greens and the Bloc Québécois.

The Conservatives win 22 seats in British Columbia, 27 in Alberta, 19 in the Prairies, 58 in Ontario, eight in Quebec, 14 in Atlantic Canada, and one in the north.

The New Democrats win seven seats in British Columbia, one in Alberta, six in the Prairies, 20 in Ontario, 60 in Quebec, six in Atlantic Canada, and one in the north.

The Liberals win six seats in British Columbia, three in the Prairies, 28 in Ontario, six in Quebec, 12 in Atlantic Canada, and one in the north.

In a 338-seat House of Commons, I estimate that these numbers would be transformed into 167 seats for the Conservatives, 108 seats for the New Democrats, 61 seats for the Liberals, and one apiece for the Greens and Bloc. In other words, still a minority for the Tories but a much slimmer one.

This could be a simple bump in the road that will easily be corrected, but there is a bit of a theme in the October averages. The New Democrats have taken a step backwards in British Columbia, Ontario, and Atlantic Canada, and in every case it has benefited the Liberals. Whether this is something that might continue into the future is worth watching.
Posted by Éric at 12:13:00 PM