The votes need to be in the mail by Monday, but it will not be until December 11 before the ballots will be counted and the next leader of the Bloc Québécois will be announced.

At one time a prestigious post, the leadership of the Bloc Québécois is not what it used to be, with only four MPs in the House of Commons and fundraising slowing to a trickle. Nevertheless, three candidates are vying for the job.

Coincidentally, this morning CROP has a new poll out in La Presse. The provincial data is fascinating, and I'll get to it next week, but let's take a look at the federal results for Quebec. 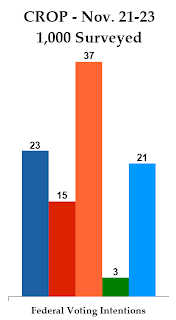 CROP last reported in mid-October, and since then the New Democrats have dropped nine points to 37%. This is the fourth consecutive poll (the others being from Harris-Decima, Ipsos-Reid, and Léger Marketing) putting the NDP below 40%, so we can say this is confirmed. Where the other parties are, however, is up for debate.

CROP sees the Conservatives up one point to 23% and the Bloc up six points to 21%. All of these recent polls have shown the Bloc up over 20%, and with Léger this is the second poll to show the BQ up a significant amount since October.

But Conservative support is pegged at anywhere between 15% (Léger) and this 23%, so there is a lot less of a consensus there.

Having the Liberals at 15% squares well with other polls, and for CROP that is a gain of two points. So, we're seeing the Tories and Liberals stable and the Bloc making gains at the expense of the NDP.

In terms of seats, these numbers would net the New Democrats 54 seats (down five from their current haul) and the Conservatives 13 seats (up eight). The Liberals would take five seats and the Bloc Québécois three.

These recent polls show that the Bloc is not quite dead yet. It is still on life-support and needs something to shock it back into cognizance, but taking over its leadership is not quite the poison pill it appears to be. The problem is, however, that the NDP and Bloc are contesting a lot of the same ridings and both parties have generally uniform support. This means that even with a closer race like we saw in the Léger poll the NDP is still able to take virtually all of the NDP/BQ contests. Unless the Bloc Québécois can get itself back over 30%, or drag the NDP down below it, they are unlikely to win enough seats to reach official party status in the House of Commons.
Posted by Éric at 9:48:00 AM