Time flies, but a little over a month ago Newfoundlanders and Labradorians went to the polls. It was a difficult election to project, as public opinion polls pegged support at ranges of up to eight points for each of the parties. How the vote would breakdown regionally in a small province like Newfoundland and Labrador was also key, and in the end the voters did something surprising.

It wasn't that they gave Kathy Dunderdale and the Progressive Conservatives a majority government, it was that they placed the Liberals as the Official Opposition over Lorraine Michael and the New Democrats. Usually that would be nothing surprising in Newfoundland and Labrador, but they did so while giving the NDP more of the popular vote and not electing Liberal leader Kevin Aylward in his own riding.

ThreeHundredEight projected 42 seats for the PCs, four for the New Democrats, and two for the Liberals. In other words, the NDP would form the Official Opposition.

The result (37 PCs, 6 Liberals, 5 NDP) was not strikingly different but was different for an important reason, as it meant a Liberal opposition. The error was a total of 10 seats, or 3.3 seats per party. Stacked up against other projections for past elections, that is not a bad result. The 77.1% (or 37 out of 48 correctly called) accuracy rating for the individual riding projections, however, was quite bad.

Using the actual provincial vote result gave a better projection with the Liberals as the second party. The riding accuracy drops to 75%, however. So there would have been more individual errors but they would have cancelled each other out for a better error per party of 2.7 seats. 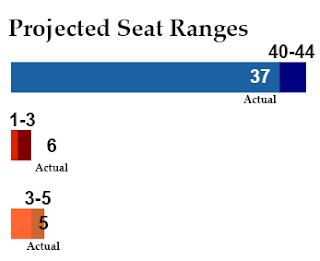 The seat range was slightly better, as it forecasted the five seats for the NDP. It still didn't put the Tories under 40, however, and limited the Liberals to only three.

The seat ranges with the actual vote was far better, with ranges of 35-43 for thee Progressive Conservatives, 2-9 for the Liberals, and 3-4 for the New Democrats. 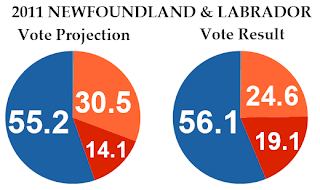 The vote projection model worked well for the Progressive Conservatives with a difference of only 0.9 points, but was off for the Liberals and New Democrats, as were the final polls of the campaign (none had the NDP at less than 27%). It is here that the vote seems to have swung, with the Liberals taking five points and the Tories only one from the New Democrats (as a net result, of course).

Accordingly, the average error per party of 3.9% was the worst of the elections that ThreeHundredEight has called. 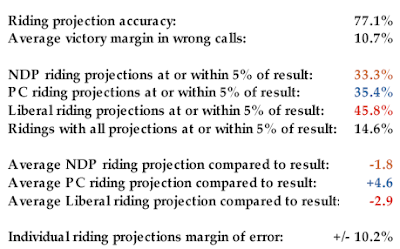 In the 11 incorrect calls made by ThreeHundredEight, the average margin of victory was 10.7 points, so this was not a factor of races being close. 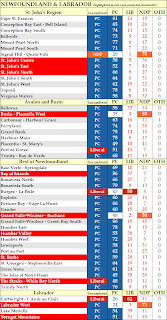 On average, the riding projections for each party had a margin of error of +/- 10.2%, which is not good at all.

But there were a few highlights. Here are the top three projected ridings: 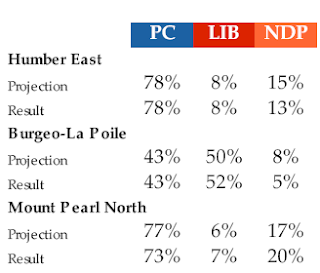 Humber East was the best as the NDP was only missed by two points while the Tories and Liberals were on the money. Burgeo-La Poile and Mount Pearl North were off by a little more.