A proposal for the House and the Senate

The Conservatives, Liberals, and New Democrats have all proposed changes that could be made to how seats are allocated and distributed in the House of Commons.

The Conservative proposal aims to improve representation by adding 30 seats to the House, while the New Democrats have proposed to give Quebec more seats than are being offered by the Tories in order to keep the province at the same level of representation it had when it was recognized as a "nation within a united Canada."

The Liberals then came forward with a proposal to keep the number of seats in the House at 308 to reduce costs, and change the allocation of seats within that 308 to improve representation. They are the only party to suggest removing seats from certain provinces.

In other words, all of these solutions are temporary, incomplete solutions that pass the problem on to the future. If we want proper representation in the House of Commons (and that is up for debate as well), something bolder needs to be attempted.

If there was no senatorial clause and no fear of removing seats from a province, proper representation could be easily achieved. But those are two major obstacles.

In order to get the senatorial clause off the books, the provinces would need to agree. As there are a lot of provinces that stand to lose seats for no other gain that is a non-starter.

To make a change to representation in the House of Commons requires a removal of the senatorial clause, and in order to remove the clause something needs to be given to the provinces in return. Taking this into consideration, here is my humble proposal and I invite readers to pick it apart.

I should point out that this is my proposed solution to this particular problem, if it is a problem that needs a solution. I am not advocating that either the House or the Senate needs substantial reform. It just seemed like an interesting puzzle to tackle.

Firstly, let's look at how to change the House of Commons formula for allocating seats. We will assume that the senatorial and grandfather clauses have been negotiated away (more on that later).

The proposal is a simple one. Every ten years, the number of seats each province receives is determined based on the newest data from the last census.

The proportion of the national population made up by each province and territory is calculated, and then applied to the number of seats in the House of Commons at the time of the re-distribution. In other words, there are 308 seats in the House now and if a province has 10% of the country's population, the province receives 30.8 seats. All decimals are then rounded-up, so this would give the province 31 seats. Using the latest estimates from Statistics Canada, this would give us the following seat distribution: 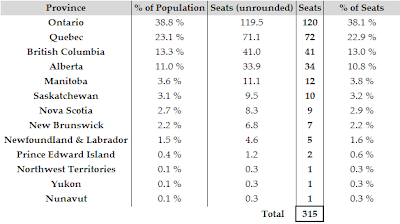 There are two reasons for rounding-up across the board. For one, it ensures that the territories would each have at least one MP. Secondly, it increases the size of the House incrementally every ten years, ensuring that MPs aren't representing huge ridings several decades from now but also ensuring that the House isn't growing by 30 seats every ten years.

Now, to the Senate. In order to get this kind of change approved by some of the provinces that stand to lose seats using this new formula, they need to be given something in the Senate. My proposal envisions a complete overhaul of how senators are chosen.

There would be 100 senators in this new Senate, with 10 from each province. This is similar to the U.S. Senate, where each state is represented by two senators. In this proposal, the House of Commons provides representation by population while the Senate is our chamber of second thought - an assembly of the provinces.

But in order to give the Senate a longer view towards the legislation it reviews, senators are not chosen en masse.

But the Senate should not be a place to reward political operatives, and it should be accountable to the population. To reflect this, in addition to nominating candidates in provincial and federal ridings, parties would be required to nominate the people they would appoint to the Senate during an election campaign. This would prevent defeated candidates for the House of Commons being appointed to the Senate, since both riding candidates and senatorial candidates would need to be named for the vote is held.

For example, in the last election campaign each party would have nominated one senator per province that they would appoint if elected as the government. So, in addition to the 308 candidates they would also have 10 senator candidates. This would give voters an extra thing to consider when heading to the ballot box, and force parties to choose worthy senatorial candidates in order to help their parties' electoral chances.

Provincial parties would do the same during their election campaigns, nominating the two senators they would appoint to the Senate if elected.

To avoid cases where senatorial nominees would resign immediately after being appointed in order to give the government in power the opportunity to appoint someone else, first-term senators would not be replaced if they retire. Only in case of death would a first-term senator's vacated spot be filled by the government, while vacancies arising from the death or retirement of two-, three, or four-term senators would be filled by the government in power but these appointees would be considered to have sat for as long as their replacement.

In other words, the replacement of a retiring fourth-term senator would only sit out that remaining term. Of course, the governing party could nominate this senator again in the next election campaign.

This system would retain the long-term view that senators can currently take into account, as terms could be as long as 16 years for federal senators. It would also make the make-up of the Senate different from the House, giving it a different point of view, both in terms of the staggering-in of appointees and the different parties represented.

Assuming that no senators would have died or retired and that this system had already been in place for the last four federal elections and three provincial elections, the make-up of the Senate would be as follows: This would certainly give a lot of legislation sobre second thought, particularly considering that the voting blocks would not be as monolithic as they are now. The 56 Conservative/Progressive Conservative/Saskatchewan Party senators, along with the six B.C. Liberals, would be expected to vote together on a lot of legislation, but if the federal government is proposing things that are not in line with the interests of, say, Atlantic Canadian provinces, the coalition of 62 conservatives could fall apart. If the 16 Progressive Conservatives from Atlantic Canada voted with the opposition, for example, they could send a bill back to the House for revision.

In this way, the Senate would be more useful and also more accountable, as senatorial nominees would play a role in ensuring that their provincial or federal parties have success in elections and they would also play a role in ensuring that they can be joined by like-minded senators in subsequent elections. A senator that enrages the population may hurt his party's chances in the next election, meaning the balance of power within a provincial delegation could be changed. But at the same time, as a senator is in for at least three terms, they would be able to do what is right rather than what is popular from time to time.

By giving the provinces an incentive to remove the senatorial clause, this proposal improves representation within the House. It also makes the Senate a potentially more effective chamber with far more diverging points of view and senators not accountable to the federal government. It also has an aspect of electoral support thrown in, giving senators greater legitimacy.

Is our current system dysfunctional? Perhaps not, and these changes are not required. But it is, I hope, an interesting alternative solution.

Over to you readers for comment and criticism!
Posted by Éric at 11:18:00 AM