Ontario and Alberta are two important provinces in a period of political flux.

The governing Alberta Tories have a new leader at the helm in Alison Redford, who hails from the more progressive side of the Progressive Conservative Party. She has a feisty challenger in Danielle Smith, leader of the right-wing Wildrose Party.

In Ontario, the Liberals were re-elected but with only a minority government, and the province could be heading to the polls at any time. Premier Dalton McGuinty’s main opponent at Queen’s Park, Tim Hudak, comes from the more conservative wing of the Ontario’s PCs.

Two provinces with premiers from different parties, and yet they have a lot in common.

What Alison Redford and Dalton McGuinty don't have in common, however, is their standing in the polls. The most recent numbers out of Alberta, reported last week by the Calgary Herald, show that the Alberta Tories are outpacing their rivals by 32 points. 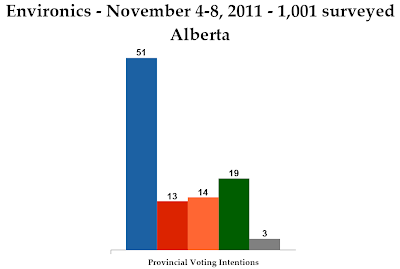 The Environics telephone poll shows that the Progressive Conservatives have dropped only three points since July, and lead with 51%. Redford wasn't the party leader at that point, so that is good news for her.

The Wildrose Party is up three points to 19%, while the NDP is unchanged at 14%. The Liberals have slipped one point to 13%.

Details in the Herald report are slim, but it appears that the NDP is running second in Edmonton with 21%. That falls nicely in line with the most recent data from Lethbridge College and Angus-Reid. Wildrose is running second to the Tories in Calgary, as would be expected.

The seat projection model for Alberta is still in a rudimentary stage, and needs to be revamped entirely. But as it stands, these results would give 81 seats to the Progressive Conservatives, four to the NDP, and two to Wildrose. I imagine, though, that the more sophisticated model, once it is complete, would show a slightly different result.

What we can say confidently is that with 51% and a very divided opposition the Progressive Conservatives have a good shot at a virtual sweep. The NDP is doing well enough to retain, and perhaps even grow, its toehold in Edmonton, while the Liberals are looking to be in trouble. If under Raj Sherman the Alberta Liberals see a drop in support next year, it would be the trifecta of the provincial Liberal decimation in the Prairies after the elections in Manitoba and Saskatchewan.

It is still very, very early going for Alison Redford and this kind of bump is to be expected. Ironically, in the interview I mention in the Huffington Post article, Danielle Smith made the same argument, saying that this kind of honeymoon in the polls comes with the territory of being a new leader. What she could have added is that she knows this by experience, as her party had a bump after she took on the leadership. But Wildrose is now far removed from where it was a year ago.
Posted by Éric at 10:35:00 AM