With the debate over the Northern Gateway pipeline running at a high temperature, both Angus-Reid and Forum Research stepped into the breach to poll the voting intentions of British Columbians. For all her chest-thumping, Christy Clark remains mired at less than half of the support enjoyed by the B.C. New Democrats' Adrian Dix. 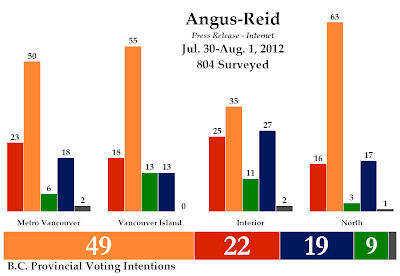 Angus-Reid was last in the field only a month ago, between July 3-5. Since then, the NDP picked-up four points to hit 49% and holds a significant lead over the B.C. Liberals, who were down one point to 22%.

The B.C. Conservatives dropped three points to 19%, while the B.C. Greens were up one point to 9%. Another 2% of British Columbians said they would vote for another party or independent candidate.

These shifts do not appear to be statistically significant, suggesting that little has changed in the province despite the row over the pipeline.

The Liberals are in a sorry state everywhere, with that last result in the Interior being their best of the poll. The 23% in Metro Vancouver is especially worrying for them, considering the Conservatives increased their support in and around the city by six points to 18%. 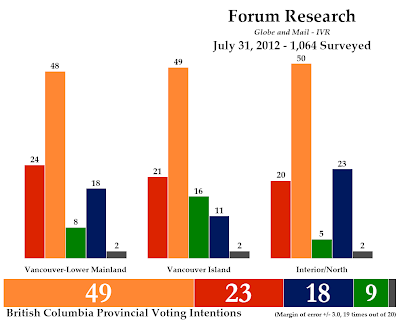 Forum was last in the field on June 12, and since then the New Democrats dropped one point to 49% while the Liberals were up three to 23%.

The Conservatives were down one to 18% and the Greens were down two to 9%. All of these shifts are within the margin of error.

They are also almost identical to Angus-Reid's results. This sort of convergence (no more than a point's worth of variation for all of the parties) is rare, especially across two surveys using different methodologies. But both Forum and Angus-Reid were in the field at the same time. That they can be so close together suggests that they are on the money.

The New Democrats hold a statistically significant (and uniform) lead in every part of the province, while the Liberals hold second place in and around Vancouver and on Vancouver Island. The Conservatives have the edge in the Interior/North. The Liberals will accordingly have a hard time holding on to their seats there when they have to fight-off both the New Democrats and the Conservatives.

They will have such a hard time, in fact, that they could be reduced to less than half-a-dozen seats. These polls are so close to one another that I just averaged them out for the seat projection, and the result is a landslide: 78 seats for the B.C. New Democrats, four for the B.C. Liberals, and one for the B.C. Conservatives. Another two seats go to independents.

While this is an incredible result for the NDP, it isn't unusual for B.C. The 2001 election resulted in an opposition of two MLAs. Unless things change, particularly if the B.C. Conservatives continue to rake in so much of the support that would otherwise go to the Liberals, the province is on track for another almost-sweep.

There are few British Columbians on the fence about Clark, with an average of 12% of respondents not sure of their opinion of her. Dix's number is a bit higher, at 22%, while over one-third of people in the province are unsure of Cummins. Clark's only real hope is that during the upcoming election campaign a large proportion of those people will swing against Cummins - but at 22% the B.C. Conservatives would be challenging the B.C. Liberals for the role of the Official Opposition.

It gets worse for Clark if we remove the "unsures": her approval rating among decideds is only 31%, compared to 35% for Cummins and 58% for Dix. That is a lot of ground to make-up, and there are only nine months left before the election campaign begins in British Columbia.
Posted by Éric at 9:28:00 AM