A new poll by CROP for La Presse confirmed the results of the weekend's Léger Marketing poll to within a percentage point, giving the Parti Québécois a five-point lead over the (now) second place Coalition Avenir Québec. Though CROP believes the numbers would deliver the PQ a minority government, ThreeHundredEight still has Pauline Marois on track for a majority.

The changes from the last projection have been minimal, with the PQ and Liberals dropping one seat each to the benefit of the CAQ and Québec Solidaire. The Parti Québécois leads with a projected 34.1% support, followed by the Liberals at 28.5% and the CAQ at 25.8%.
Québec Solidaire (6.7%), Option Nationale (2.1%), and the Greens (1.8%) round-out the top six.
It is worth noting that though the projection gives the Liberals a second place finish, the unadjusted poll average now puts the CAQ narrowly ahead with 27.6% to 27.3% in voting intentions.
In terms of seats, the projection now awards the PQ 66, three more than is needed for a majority government. The Liberals take 32 and the CAQ take 25, with two seats going to Québec Solidaire.
The ranges have widened somewhat, however. The PQ could win between 48 and 79 seats, suggesting that a minority government is still very much a possibility. The Liberals could win between 24 and 52 seats, theoretically making a PLQ minority possible. But that is an extraordinarily unlikely scenario of Albertan proportions.
They should be more concerned with the CAQ, who has a range of between 13 and 34 seats. Their upper range is above the forecasted result for the Liberals. Considering the way the campaign is going (Liberals sliding, CAQ gaining), the race is truly on for the role of the Official Opposition.
Québec Solidaire should win one or two seats, while Jean-Martin Aussant can still hope to win his seat of Nicolet-Bécancour.
There have not been any major shifts in support as the CROP poll was very similar to the recent numbers by Léger and Segma Recherche. The Liberals did slip slightly on the island of Montreal and among non-francophones, but it did not cost them a seat. Their loss was in Quebec City, where they were down slightly and the PQ was up by even less. The CAQ made gains in the suburbs of Montreal, however, and are poised to start picking off PQ seats if things continue in this fashion. 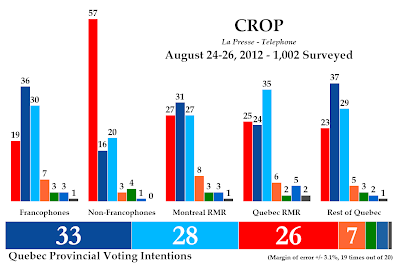 CROP was last in the field Aug. 12-14, and since then there have been no statistically significant shifts in support. That does not mean that nothing has happened, as the confirmation of a third place finish for the Liberals does tell us something.
The PQ was down one point to 33% while the CAQ was up three to 28%. The Liberals were down one to 26%, while Québec Solidaire was unchanged at 7%.
The lead the PQ holds is statistically significant (though just barely), while they also hold a noteworthy lead among francophones. Their support has dropped, however, by three points to 36%. The CAQ is up four to 30% among francophones, while the Liberals are down two to 19%.
The Liberals continue to lead among non-francophones with 57%, unchanged from CROP's last poll. The CAQ, at 20%, is also steady.
The PQ has the edge in the Montreal suburbs and in the regions of Quebec, while the CAQ is ahead in Quebec City. The Liberals are in front on the island of Montreal. The PQ saw negligible growth in the two regions where they have the advantage, but took losses in Quebec City and the island of Montreal. The CAQ was up across the board (except in Montreal), while the Liberals were down across the board (again, except in Montreal). The polls are unanimous on this question - despite their sagging support, Jean Charest's Liberals are still doing well on the island.
Riding polls
Two riding polls were also added to the projection. A poll by Cible Recherche for TVA in Trois-Rivières suggests that Djemila Benhabib of the PQ is in a strong position with 38%. Danielle St-Amand, the incumbent Liberal MNA, trails with 29%. The CAQ is further behind with 21% support. This poll echoes the one done by Segma early in the campaign, and is in opposition to the small-sample poll by Baromètre that gave the Liberals a wide lead. The projection has had the PQ in front for some time.
The other poll was in Hull. Conducted for Le Droit, the Segma poll found the Liberal incumbent Maryse Gaudreault leading with 39%. The PQ's Gilles Aubé trails with 30%, while Québec Solidaire placed third with 14%. The CAQ was in fourth with 12%. Though the projection had a slightly closer race, this is generally in line with what the model had. It also seems to contradict some of what Jean-Marc Léger has said about the Outaouais region, which he has called a three-way race. The ADQ has never been a factor in the Outaouais, and it does not seem like the CAQ is making inroads either.
A bevy of riding polls were released this morning for Taschereau, Brome-Missisquoi, Papineau, Orford, Saint-François, and Sherbrooke but they have yet to be added to the model. I will take a look at them in detail in the next update.
Posted by Éric at 10:36:00 AM