Le Journal de Montréal released the details of a monster Léger Marketing survey at midnight to great anticipation, though the results were less shocking than they were in-depth. But they do show that the Coalition Avenir Québec is continuing to make modest, but steady, gains. Now that they are pushing the Liberals for second place, they are also starting to push the Parti Québécois out of some seats.

But the PQ is still in the lead, though the party slipped one point to 35% in the projection. They are also down five seats to 65, putting them just over the bar of the 63 seats needed to form a majority government.
The Liberal slide continues, as they have dropped 1.2 points to 29.9%. Because of better numbers in and around Montreal, however, the party has managed to increase its seat haul by one to 38.
The CAQ is up 1.4 points to 24.6% and five seats to 21, while Québec Solidaire is down 0.2 points and one seat to 5.7% and Amir Khadir.
Option Nationale is up 1.2 points to 2.1%, putting them ahead of the Greens. They are down 0.2 points to 1.6%.
The seat ranges have moved significantly, with the Parti Québécois capable of winning between 53 and 79 seats. As the Liberal range has dropped to between 24 and 51 seats, a Liberal plurality is no longer considered possible. Instead, they are now threatened by the CAQ for the role of Official Opposition, as the party could win between 14 and 32 seats. That is a bit of an overlap, and with the CAQ having the momentum and running much closer in the straight poll average, the odds are turning against the Liberals.
Québec Solidaire dropped significantly on the island of Montreal, falling 3.9 points to only 8.1%. That puts them only a few ticks above their 2008 performance, and that is why the party is only projected to win one seat, and as few as none. The Liberals dropped 2.1 points to 36.4% and the PQ two points to 29.1%, while the CAQ made a big five point gain. They now sit at 18.7% and actually have three seats in range. That is primarily due to the divergent poll results increasing the volatility on the island, but it is something to keep an eye on.
In the suburbs around Montreal, the PQ dropped two points to 36.4% and six seats. The lion's share of the gains went to the Liberals, up 1.3 points to 28.7% and four seats. The CAQ was also up, gaining a point to reach 26.6%.
Quebec City saw a fair amount of change, as the Léger poll gave the CAQ a wide lead, rather than the Liberal lead that CROP identified. As a result, the CAQ picked up 3.6 points to reach 34.1%, and is up three seats to six. The Liberals dropped 5.6 points to 29.6% and five seats to only three, opening an opportunity for the PQ. The party only increased its support by 0.4 points to 26.4%, but gained a seat in the process.
In central Quebec, the PQ continues to lead with 33.6% (-0.3) but the Liberals fell 0.3 points to 28.4%, costing them one seat. The CAQ won it despite dropping 1.7 points to 27.5%. Notable is the 3.3-point gain by Option Nationale in the region. They currently have 4% support, just behind Québec Solidaire. It is no coincidence that their best region of the province is also where Jean-Martin Aussant is running.
And in western Quebec, the CAQ picked up 3.6 points and one seat. They are still in third at 25.2%, but the gap has narrowed with the Liberals as they were down 2.8 points to 26.4%. The PQ, at 38.3%, still leads in the region.
Note that the projection model gives the Liberals (and the PQ) an organisational/turnout bonus, and this is why the party is still in second place in the Montreal suburbs and in eastern, central, and western Quebec. If we go just by the polls, however, the Liberals are in third in those regions. 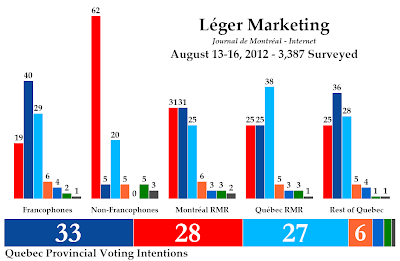 Léger was last in the field on Aug. 6-8, and since then the PQ has gained one point and has extended its lead over the Liberals. The PQ sits at 33%, while the PLQ has dropped three points to only 28%. At 27%, the CAQ is steady.
Québec Solidaire is also unchanged at 6%, while Option Nationale is up one point to 3%, their best polling result on record. The Greens were unchanged at 2%.
Only the Liberals' three-point drop appears to be statistically significant. Their drop of 19 points among non-francophones is also notable, as they are now at 62%. The CAQ made a big 11-point gain to 20%, the second consecutive poll to give the party this level of support among these voters. It could be a coincidence, or it could be that the CAQ's attempts to woo the anglophone electorate are paying off.
The CAQ's increase on the island of Montreal (from 14% to 22%) is accordingly outside the margin of error, while Québec Solidaire's drop of five points to only 7% is also more than a wobble. It is quite unusual for QS to be polling so low in Montreal, their one region of concentrated support.
Riding polls
Segma Recherche completed its tour of the Saguenay-Lac-Saint-Jean region for Le Quotidien today. In Roberval, Segma gives the PQ a wide lead with 53% to 26% for the Liberals. The CAQ, at 14%, trail in third by some distance. In Jonquière, the PQ is also very secure with 51% support to 20% for the Liberals and 17% for the CAQ. Both of these results were very close to what the projection had, but again we're seeing the Liberals being slightly over-estimated at the expense of the CAQ.
But there is a bit of a variation between the results from Léger's poll (in the field Aug. 13-16) for the Saguenay-Lac-Saint-Jean and the combined results of Segma's polling (the five surveys spanned Aug. 11-16 altogether). Léger gives the PQ the lead with 38%, but puts the CAQ at 26% and the Liberals at 22%. By contrast, the average of Segma's five riding polls gives the PQ 52% to 23% for the Liberals and only 17% for the CAQ.
Granted, Léger polled only 262 people in the region while Segma's five polls surveyed almost 3,000, so the margin of error can account for much of the discrepancy. Segma's more in-depth polling also has to be given the benefit of the doubt. But it does suggest that the PQ's lead in the area might not be as solid as Segma has found it to be. And if that is the case in the Saguenay-Lac-Saint-Jean region, could it be the case elsewhere?
Posted by Éric at 3:28:00 PM