UPDATE: A Forum poll conducted at the end of July and tucked away in a graphic for an article by The National Post was missed, but Forum has just released the data and I have updated the graphics and text below. My apologies.

This being the summer, it is no surprise that only three federal polls were released during the month of July. For that reason, the monthly polling averages have far less to tell us than they usually do. Accordingly, I will not spend too much time analyzing these numbers. I post them more for the sake of continuity. 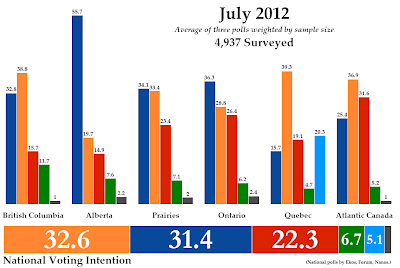 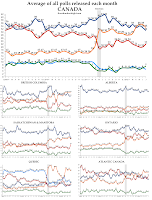 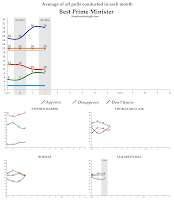 There was only one poll on approval ratings and none on who Canadians feel is the best person to be Prime Minister.

In terms of seats, the Conservatives would win 127 on these support levels, with the New Democrats taking 119, the Liberals 59, the Bloc Québécois two, and the Greens one. Compared to June, that is a loss of six seats for the Tories, three for the Bloc, and two for the New Democrats. The Liberals are up 11 seats. 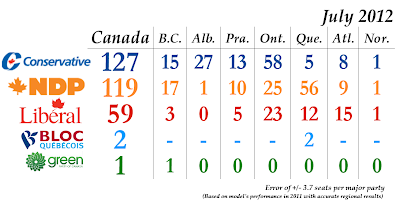 The numbers in British Columbia and the Prairies are pretty good for the New Democrats, but the Conservatives' strength in Ontario (and Alberta, of course) gives them the edge.

A rough estimate puts the Conservatives at 143 seats, the New Democrats at 128, and the Liberals at 64 in the expanded 338-seat House.

If they were so inclined, the New Democrats and Liberals could come together to govern with a majority, which is a dangerous situation for the Conservatives. It will be a majority or bust for the Tories in 2015 after nine years in power. That is, of course, unless the New Democrats and Liberals rule out any sort of cooperation. The identity of the next leader of the Liberal Party may play a role in how that plays out.
Posted by Éric at 10:50:00 AM