A new poll by CROP for La Presse today showed that the Parti Québécois and Coalition Avenir Québec are generally where other pollsters have recently pegged them to be. But with a drop in support in Montreal, the Liberals have taken a hit. 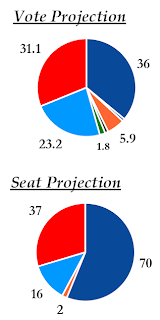 The Parti Québécois has held steady, with a tiny 0.1 point drop to 36% in the projection. The Liberals, however, are down 1.2 points to 31.1%. The result is a net five seats swinging from the Liberals to the PQ, giving the PQ 70 seats to 37 for the Liberals.

The CAQ appears to be stuck in third, with between 20.2% and 26.2% support and between 10 and 27 seats. At the very least, however, François Legault is sure to see his party's representation in the National Assembly grow.

The Liberals slipped most dramatically on the island of Montreal and among non-francophone voters. They are down 3.8 points on the island to 38.5%, decreasing their seat haul by three to 17. The PQ is up 0.9 points to 31.1% and three seats to nine, while the CAQ has moved back into third place. They jumped three points to 13.7%, putting them narrowly ahead of Québec Solidaire, which sits at 12% support.

Among non-francophones, who mostly live on the island of Montreal, the Liberals are down 3.5 points to 66.4%. The CAQ increased their support among this electorate by 2.8 points to 12.7%. They are still a long ways from challenging the Liberals among the anglophone population, but this may be the first sign that the CAQ's efforts are paying off.

The Parti Québécois made its two other seat gains in the Montreal suburbs, thanks to a 0.9-point drop by the Liberals to only 27.4%. The PQ did slip 0.4 points to 38.4%, however. The CAQ was also down, falling 0.2 points to 25.6%. But they are ahead of the Liberals in the region in the unadjusted poll average. 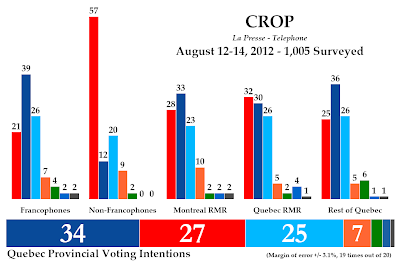 CROP was last in the field Aug. 4-8, and since then the PQ has picked up two points to lead with 34%. The Liberals were down two points to 27% while the CAQ was up four points to 25%, a statistically significant increase.

Québec Solidaire slid one point to 7%, while the Greens and Option Nationale were unchanged at 3% and 2%, respectively.

The Parti Québécois holds the lead among francophones (where there have been no significant shifts in support) and in and around Montreal, where they have 33% support to 28% for the Liberals. There is a three-way race in Quebec City in CROP's polling, and the PQ has the advantage in the rest of Quebec with 36% to the CAQ's 26%.

The Liberals dropped two points to 57% among non-francophones, but they still hold a wide lead. The CAQ picked up 12 points to hit 20%. The margin of error is quite large due to the sample being so small, but the increase in support for the CAQ among this electorate does not appear to be noise.

Segma Recherche and Le Quotidien continue to treat us to riding polls for the Saguenay-Lac-Saint-Jean region, this time looking at Dubuc. This riding is actually an interesting one, as it is one of the closer races in the region and is a riding that should swing from the Liberals to the PQ. The poll gives the PQ 44% to the Liberals' 32% and the CAQ's 18%, virtually identical to what the projection had for the riding yesterday. But the projection was slightly under-estimating CAQ support in Dubuc, so the poll was added. Le Quotidien is supposed to publish the results of polling in Roberval and Jonquière tomorrow. The projection gives both of these ridings to the Parti Québécois by a wide margin.
Posted by Éric at 4:26:00 PM