Rogue poll or a turning of the tide for PLQ?

So you might have heard that a new poll came out today. A collective scoff emerged from Quebec when The National Post released the details of the newest Forum Research poll. The survey puts the Liberals ahead of the Parti Québécois by six points, after having the PLQ trail by four only a week ago. Is it a rogue poll? A 19 out of 20 result? Just a badly done bit of public opinion polling? Or the first sign that things are turning around for Jean Charest? We'll find out soon enough.

I wrote about the poll for The Globe and Mail this morning, so I invite you to read the article for more detail on how it stands up to other surveys in the province.

With the Liberals now in front in the vote projection, they also move ahead in the seat projection. They picked up 20 seats to surge to 58, five short of a majority, while the PQ dropped 16 seats to 49. The CAQ dropped five seats to 16 and Québec Solidaire increased their share from one to two.

It goes without saying that the poll has injected a great deal of uncertainty into the projection, which now gives the Liberals and the PQ the possibility of forming a majority government or winning as few as 35 seats. In other words, because of this poll the projection model has no idea what would happen if an election took place today. This was the same sort of thing that occurred when Forum released their eleventh hour poll on the eve of the Alberta election, suggesting that a swing from Wildrose to the Progressive Conservatives was taking place. That a swing was underway turned out to be right, but it was the kind of swing that people were expecting to happen in Alberta but never seemed to (at least in the last week of polls). This swing from the PQ to the Liberals is completely unexpected.

For that reason, I don't want to get too much into the details of the new projection. If this is a rogue poll, it will swing back hard when Léger Marketing and CROP release their new numbers. If it isn't, and the two Quebec-based firms show the same Liberal surge in support, then we will know something is really going on. We should probably give Forum the benefit of the doubt for now and consider them innocent until proven guilty. Few believed the first poll that showed the New Democrats surging in Quebec in the 2011 federal election, after all.

After watching the three debates that have taken place so far, it does not seem unlikely that Jean Charest has indeed stopped the bleeding. I'm not convinced, however, that he did enough to cause such a huge shift in voting intentions. The final debate between Pauline Marois and François Legault, which takes place tonight, will be very important in deciding how the anti-Charest francophone vote will go. Marois has the advantage (even in Forum's poll), so the onus is on the CAQ leader to perform. 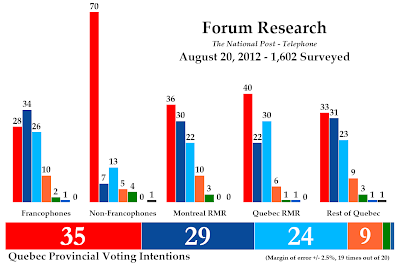 Forum was last in the field on August 13, and since then the Liberals increased their support by four points to lead with 35%. The PQ dropped six points to 29%. The CAQ was down one point to 24%.

Likely due to Françoise David's good performance in the debate, QS increased their support by three points. At 9%, the party is at their high watermark of the campaign so far. But Forum also added Option Nationale to their polling. At 1% they are not a big factor, but combined with the three points that QS gained we start to see where the PQ lost their six points.

But the Parti Québécois does still have an ace up their sleeve, as Forum found that 82% of their voters are very or somewhat enthusiastic about voting for the party. By contrast, enthusiasm sits at 72% among Liberals and 70% among CAQ voters. If that's a proxy for turnout, that transforms a six-point Liberal lead into a neck-and-neck race with the PQ.

On the other hand, 48% of PQ supporters felt that Françoise David won the Sunday debate, compared to 23% who said Marois won it. CAQ voters were more split between David and Legault, while PLQ voters felt Charest won. This indicates a less than strong attachment to Marois from PQ supporters.

Another riding poll for Nicolet-Bécancour has emerged. The riding is looking like one of the most interesting in Quebec, as a poll by Cara-Telecom for Le Courrier Sud and CKBN Radio sees a four-way race. With only 223 surveyed the margin of error is quite high (+/- 6.6%), but the poll gives Jean-Martin Aussant 29.7% support to 26.2% for the CAQ's Donald Martel. The Liberals are not far behind at 24.1% while the PQ brings up the rear at 20%.

The results are not very different to Cible Recherche's poll taken over some of the same days, which also put the race as one between Aussant and Martel. The only difference is in Liberal and PQ support, but the margin of error takes care of that. Nicolet-Bécancour will certainly be a riding to watch on Sept. 4, and if the result of the election is a minority government that one seat could be extremely important.
Posted by Éric at 4:00:00 PM