Two new surveys were out this morning, suggesting that the Parti Québécois and Liberals remain in a tight race with the PQ holding a slight edge. One poll, however, shows the Coalition Avenir Québec making major gains while the other shows them holding steady. The projection is less ambiguous, as the party continues to make gains.

The CAQ has made up the difference, picking up 1.1 points to hit 22.7% support and four seats. They are now projected to win 18.

Québec Solidaire is up 0.3 points to 5.8%, while the Greens are down 0.3 points to 2% and Option Nationale is up 0.9 points to 1%. As expected, the inclusion of ON in the Léger and CROP polls has put them back to where they should be in the projection.

But the ranges have widened considerably - understandably, considering that the CAQ has been pegged at between 14% and 27% in a period of just one week. The seat range chart indicates how confused things are becoming as all three main parties do overlap around the 40-seat mark. It is very unlikely that the CAQ could pull as many as the 42 seats indicated at the high end of their projection, but they are involved in a lot of close races. Everything from a PQ or PLQ majority to a CAQ minority are possible at this stage. Whether they are plausible is another thing entirely. But, then again, my high seat range of some 60 seats for the Alberta PCs on the eve of that province's vote looked highly implausible.

The Parti Québécois made a gain in central Quebec, where they now lead with 35.4%. They are up 2.8 points and two seats, and are now projected to win 12 of the 20 in the region. They are also in the running in three other seats there. The PQ had minor shifts in western Quebec (down 0.9 points to 39%) and Quebec City (up 0.9 points to 24.5%), but were down much more significantly on the island of Montreal and in the suburbs. On the island, the party is down 3.1 points to 27.2%. Off of it, they are down 3.4 points to 35.9%. They still lead there, however.

The Liberals had a small gain in eastern Quebec and held steady in the Montreal suburbs, but were down everywhere else: 1.2 points on the island, 2.2 points in western Quebec, 3.1 points in central Quebec, and 4.1 points in Quebec City. They are barely leading there with 33.1%, and are actually behind the CAQ in the unadjusted poll average.

The CAQ saw big increases in the Montreal suburbs (3.1 points to 28.3%) and in western Quebec (6.7 points to 24.1%), but were generally flat everywhere else. They have dropped in Quebec City and central Quebec, but only by 0.3 points.

One important gain they did make, however, is among francophones. The party is now second among this electorate, with 27.8% to the PQ's 39% and the Liberals' 22.6%. The Liberals lead among non-francophones with 76.1%, however. The CAQ has not registered any major increase among this demographic yet, but they are second with 9.3%. 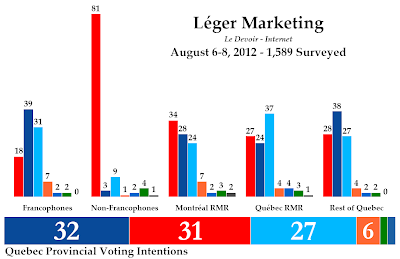 Léger Marketing was last in the field just before the campaign began (July 29-31), and since then there has been little major movement - except for the CAQ. The PQ has dropped a point to 32%, the Liberals are unchanged at 31%, Québec Solidaire is down one point to 6%, and the Greens are two to 2%, making enough room for the CAQ to jump six points and hit 27%. That makes it a true three-way race, and it is a statistically significant increase in support. 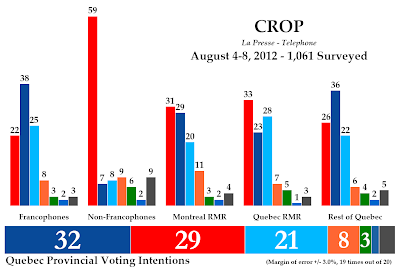 CROP was last in the field for the media in May, so a comparison is not really worth the trouble - especially considering that CROP has switched back to telephone polling.

But they show the same sort of race between the PQ (32%) and the Liberals (29%) as Léger identified, the big difference being the 21% for the CAQ. It is possible that CROP was polling too far back (their field dates stretch back to Saturday) to capture a lot of the party's momentum that Forum and Léger have recorded.

Another difference in this poll is that the Liberals are holding on to their lead in Quebec City, but it is close enough to be statistically insignificant.

Also worth mentioning is a poll conducted by Segma Recherche for La Tribune. They found that Jean Charest is trailing PQ candidate Serge Cardin in the riding of Sherbrooke by 46% to 31%, support levels that were within the projection's range for these two candidates in the riding. But the CAQ at 11% and QS at 6% was a little above and below the projected ranges, so the poll has been inserted into the model. It will serve as a partial base for future shifts in support. The poll does demonstrate, though, that the projection model is working well so far.
Posted by Éric at 3:32:00 PM