A new poll conducted the night of the writ drop suggests that the Liberals and Parti Québécois have made gains off of both the Coalition Avenir Québec and Québec Solidaire. Is a multi-party race turning into a two-party face-off? 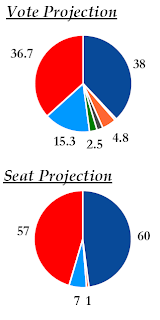 It is certainly too early to tell, and the poll by Forum Research may prove to be an outlier. But the projection now gives the Parti Québécois 38% of the vote and 60 seats, compared to 36.7% and 57 seats for the Liberals. That is a gain of five seats for Jean Charest, primarily at the expense of the CAQ. They have dropped to only 15.3% of the vote and seven seats in the projection, while Québec Solidaire is down to 4.8% and one seat.

It is a remarkable shift. Time will tell if it is only a blip on the radar screen, but the drop in support for the CAQ is catastrophic, if true. At these levels of support, François Legault is roughly where Mario Dumont was at the end of the 2008 election campaign, when the party was clearly on the downswing after their breakthrough in 2007.

But the new poll is at variance with Léger's latest, forcing the projected seat ranges wide apart: the Parti Québécois is likely to win between 41 and 80 seats while the Liberals should win between 39 and 77. That is enough to hardly be helpful, but with the PQ and Liberals still neck-and-neck and volatility in the polling, this is what happens.

The CAQ is set for a very bad showing, at between two and 11 seats, while Québec Solidaire could win two or zero seats. Option Nationale has benefited from the uncertainty, as they could now potentially pull one seat (Jean-Martin Aussant's) out of the fog.

Regionally, the Parti Québécois is ahead in the projection in western Quebec (40.9%), the suburbs of Montreal (42.5%), and eastern Quebec (49.5%). These three regions provide the party with 44 of their projected seats. But they are also almost maxed out in these regions, as they have little more room to grow, particularly outside of the Montreal metropolitan region. 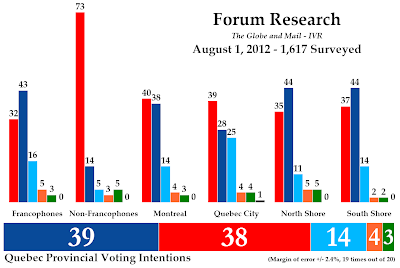 Forum was last in the field on May 17, and since the PQ gained six points to hit 39%, while the Liberals were up four to 38%.

The CAQ dropped five points to 14% and Québec Solidaire six points to 4%. All of these shifts are statistically significant.

But the regional leads each party holds (the Liberals in Montreal and Quebec City and the PQ elsewhere) are not. Only the PQ lead among francophones and the Liberal dominance among non-francophones is statistically significant.

This poll is a shot across the bow of the CAQ. They may be doing much better than this and Forum pegged them at the bottom edge of their margin of error, but that the polling firm can pull a 14% result out of the electorate has to be worrying for Legault. Much worse is the 16% among francophones, which spells disaster for the party.
Posted by Éric at 3:15:00 PM