PQ on verge of losing majority

Polls from Forum Research for The National Post and CROP for La Presse have been added to the projection. Together, they suggest that the Parti Québécois's quest for a majority is on a knife's edge, and that the role of the Official Opposition is still very much up for grabs.

The projection awards the Parti Québécois 33.7% support, compared to 28.1% for the Liberals and 26% for the Coalition Avenir Québec. In fourth is Québec Solidaire, at their highest point in the campaign with 7.8% support.

This would deliver 64 seats to the PQ, 33 to the Liberals, 26 to the CAQ, and two to Québec Solidaire. As 63 seats are needed for a majority government, the PQ is really on the edge. If the projection is off by two seats, which would be a great result, it would mean the difference between minority and majority.

The ranges show, however, that the PQ is the only party in the running for government. They could win between 54 and 73 seats, straddling the majority line almost exactly. The Liberals, with between 27 and 43 seats, are well placed to form the Official Opposition (and they can thank Montreal for that), but the CAQ could also take on the job with between 19 and 32 seats.

Québec Solidaire, with between one and two seats, and Option Nationale, with potentially one seat, could hold the balance of power.

The CAQ has been making gains in central Quebec and the suburbs around Montreal, putting a lot of pressure on the Parti Québécois. They are doing very well in Quebec City but are not strong enough in other parts of the province to have a shot at forming government. The Liberals, with their solid base of support in Montreal and the Outaouais (22 of their 33 seats), have a head-start on the CAQ.

The turnout adjustment benefits the PQ and the Liberals only slightly in terms of seats. Without the adjustment, the poll averages alone would still deliver 32 seats to the Liberals and 61 to the Parti Québécois. That means a minority, but with the two seats from Québec Solidaire the PQ could make it work. The CAQ, with 30 seats, still ends up in third place even with a second place finish in the popular vote. 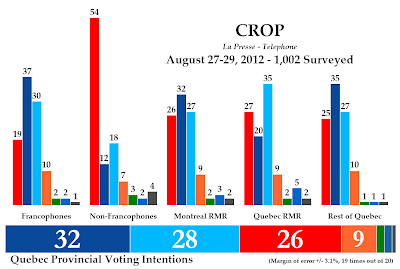 The unexpected CROP poll of this morning shows very little change from their last poll of Aug. 24-26. The PQ is down one point to 32% while the CAQ and PLQ are steady at 28% and 26%, respectively. With a two point gain, Québec Solidaire is now at 9%.

All of these shifts are within the margin of error, however, suggesting that things are now solidifying. The CAQ needs to continue its momentum in order to have a shot, but that does not seem to be in the cards for them.

But it is worth noting that while the shifts in support are statistically insignificant, the lead the PQ holds over the CAQ is as well (just). We also can't say with absolute certainty that the CAQ is ahead of the Liberals (though we can say that the PQ is). It makes for a potentially interesting finish on Tuesday night. 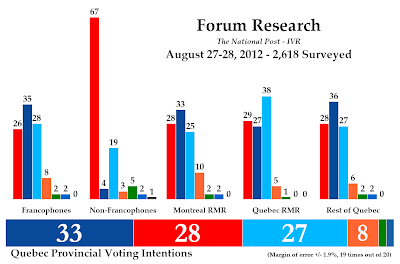 Forum fell into line with everyone else after their stand-out poll from last week, but the firm still seems to be showing better numbers for the Liberals. Perhaps the IVR method overcomes a "shy Tory" factor for the PLQ. We will find out on election night.

Together, these two polls tell a similar story of a close three-way race. The PQ has the advantage but neither the CAQ nor the PLQ are taking on runner-up status. The CAQ is ahead in Quebec City and the PQ elsewhere, while QS is doing better than they were before the debates.

We will have to wait and see what Léger Marketing says with their final poll, expected this weekend.

A large amount of riding polls were released in the last few days, and all have been added to the projection. Let's go through them quickly.

A poll for Le Soleil by Segma in Taschereau found Agnès Maltais of the PQ well ahead of Clément Gignac of the Liberals, with 41% to 19%. QS and the CAQ tied for third with 16% apiece. The projection also showed Maltais as the likely winner.

Another Segma poll for Le Voix de l'Est in Brome-Missisquoi found a close three-way race. Benoit Legault of the CAQ came out ahead with 32% to Richard Leclerc's 31%. The incumbent Liberal, Pierre Paradis, was in third with 27%. The projection also shows a close three-way race, but gives Paradis the advantage.

A poll in Papineau by Segma for Le Droit put Jean-François Primeau of the PQ ahead with 36%, followed at length by Alexandre Iraca of the Liberals with 27%. It confirmed the projection's prediction that Papineau would go PQ, but it did not give Primeau such a large lead in the formally safe Liberal riding.

Three polls by Forum Research for the Stantead Journal showed close races in Estrie: 36% for the Liberals to 35% for the PQ in Orford, 39% for the PQ to 37% for the Liberals in Saint-François, and 41% for Serge Cardin of the PQ to 39% for Jean Charest in Sherbrooke. That last one is of some interest, considering the leads that Segma has given Cardin in two polls.

Moving on to the Gaspésie, two polls by Segma agreed with 308 that the PQ could win Bonaventure and Gaspé, but the poll for Graffici put the Liberals much further behind in the latter: 57% for Gaétan Lelièvre in Gaspé to 20% for the incumbent Georges Mamelonet. It showed a closer race in Bonaventure, with 41% for Sylvain Roy of the PQ to 34% for Damien Arsenault of the PLQ.

Another poll in Saint-François, this time by Segma for La Tribune, gave the PQ's Réjean Hébert a 20 point lead over Nathalie Goguen, with 46% to 26%. That is much more in line with what the projection had.

And finally, five polls this morning by Segma for Le Quotidien in Dubuc, Chicoutimi, Jonquière, Roberval, and Lac-Saint-Jean confirmed that the PQ is poised to sweep the Saguenay-Lac-Saint-Jean. Interestingly, however, in all of the ridings except Roberval the CAQ has moved into second, ahead of the Liberals. On average, the CAQ gained six points in these ridings since Segma's last poll of the region between Aug. 11-16. Both the PQ and the Liberals have lost three points. This is a strong indication of how the Liberals are suffering in francophone Quebec, but also how the PQ is relatively stagnant. Remember that the PQ is likely to win the election on Tuesday with less of the vote than they took in their 2008 defeat.
Posted by Éric at 1:41:00 PM