A little over a month ago, I transposed the votes for the proposed boundaries in Newfoundland and Labrador. The boundaries in the province were changed significantly, but the outcomes were changed considerably in only one riding, as the new boundaries of Avalon contained more Conservative voters than Liberals. We now move on to the five ridings in northern New Brunswick, where the results of the 2011 election are not overturned.

The following transposition of votes is unofficial. In addition to human errors, it was not possible to include the special or mobile polls in the transposition and not every poll from the map used last year fits the new boundaries perfectly. However, the overall effect on the results should be relatively minimal and the estimated transposition should not have an error of more than a few tenths of a percentage point.
New Brunswick received no new seats and all 10 of its ridings had small changes to their boundaries. Let's start with the riding that has undergone the most amount of change.

The old riding of Beauséjour lost a bit of its northeastern section and a small piece of territory to the east of Moncton, but gained the area of Dieppe in return.
The population of those lost areas was quite small, with some 2,000 voters (not eligible voters, people who actually voted) being sent off to Miramichi and Moncton-Riverview. Dieppe hands over 9,500 voters to the new riding, however. Those voters lost were far more favourable to the New Democrats than the average in the riding and far less friendly to the Liberals, but the voters in Dieppe were more favourable to the Liberals, as well as to the NDP, meaning that the upshot is a gain for both parties.
The gain is relatively small, with the Liberals going from 39.1% to 40% and the NDP from 23.4% to 24%. The Conservatives dropped quite a bit more, however, as voters in Dieppe supported them to the tune of only 24.3%, compared to 33.3% in Beauséjour as a whole. Their support has dropped to 31.8%.
The new boundaries makes Beauséjour-Dieppe a slightly more three-way race than it was previously, but it still looks relatively safe for the Liberals. 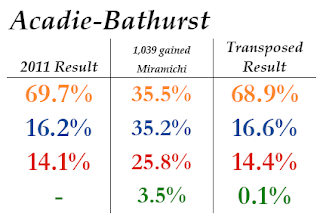 The riding of Acadie-Bathurst changed only slightly, with territory north of the Jacquet River Gorge on the Baie-des-Chaleurs being grafted on, adding a little over 1,000 voters.
Acadie-Bathurst is a very solidly NDP riding, with Yvon Godin having gotten more than two-thirds of the vote in 2011. The new voters around Belledune were far more split between the three major parties, but the overall change is very minimal and the riding remains a very secure one for the New Democrats. 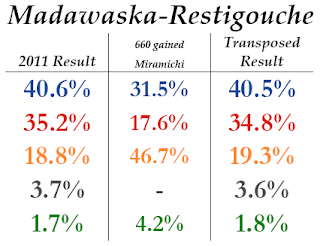 Madawaska-Restigouche gained the piece of land between it and Acadie-Bathurst, but the number of voters in the region is very small. They were more open to the New Democrats, thereby boosting the party's support from 18.8% to 19.3%, but overall the new boundaries have changed things insignificantly. It remains a Liberal-Conservative contest.

Miramichi moved southwards, gaining land from Beauséjour and Tobique-Mactaquac in exchange for their losses in the north. In all, however, only about 2,000 voters went each way.
The resulting change in support penalizes the Conservatives to the benefit of the New Democrats, but not in any dramatic fashion. The Conservatives fall from 52.4% to 51% while the NDP moves from 23.1% to 24.2%, but the Conservative advantage of almost 27 points is still very large. 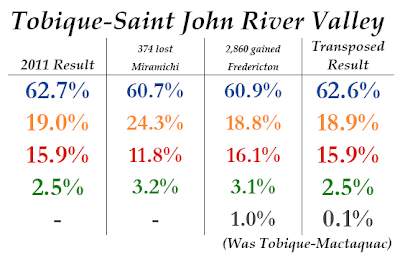 Things changed unremarkably in Tobique-Saint John River Valley as well. The riding lost a handful of voters to Miramichi but gained almost 3,000 from the formerly sprawling Fredericton riding. Those voters picked up in Fredericton voted in an almost identical fashion to those in Tobique-Mactaquac. The result is that no party saw their transposed totals change by more than 0.1 points. Tobique-Saint John River Valley remains safely Conservative.
In 2011, the Conservatives took three of these ridings and the New Democrats and Liberals each took one. Based on currently polling levels, the projection model would swap Madawaska-Restigouche over to the Liberals, giving them and the Conservatives two seats apiece and the New Democrats one.
The victors are no different with the transposed results. However, the projection in Miramichi is somewhat closer. Instead of the Conservatives being given the advantage with 38% to 32% for the New Democrats, the  small shift transforms that into a 36% to 33% lead for the Tories. In other words, Miramichi is slightly more of a battleground than it was previously. But overall, the proposed boundaries in northern New Brunswick do not result in any major changes in the political make-up of the ridings.
Posted by Éric at 9:48:00 AM