One province-wide poll and three riding polls have been released since the last update, and for the first time in the campaign they put the Parti Québécois in a position to form a slim majority government.

With a gain of 1.6 points, the Parti Québécois is now projected to take 36.1% of the vote, giving them 65 seats. That is a gain of seven since the last update and just enough to put them over the barrier of 63 seats that is needed for a majority government.

The Liberals have suffered most at the hands of the PQ, slipping five seats to 42 and 0.4 points to 32.3%. The Coalition Avenir Québec made a small gain in the popular vote, up 0.5 points to 23.2%, but has lost two seats. They are now projected to win 16.

The polls have tightened up considerably throughout Quebec, shrinking the projection ranges as well. This has had an important effect on the potential results, as the CAQ's high range no longer overlaps with the low ranges of the PQ and Liberals. The PQ is now projected to win between 50 and 75 seats, putting them in a very good position to come out ahead. The Liberals are projected to win between 30 and 54 seats, making a Liberal plurality highly unlikely. And with between 10 and 28 seats, the CAQ forming the Official Opposition, or even heading up a weak minority government, is out of the question.

The Parti Québécois has made gains in most parts of the province, but primarily in and around Montreal. On the island there have been no changes in seats, but the PQ is up three points to 30.2%. That still puts them well behind the Liberals, who lead with 42.3% (+0.7) in the projection, but the PQ is currently at their floor in terms of seats. They have room to grow, while the Liberals are at the high end of their capabilities. Québec Solidaire has moved back into third on the island, with a 0.3-point gain to hit 11.9%.

The PQ also made gains at both ends of the province, picking up 2.8 points in western Quebec and 3.2 points in eastern Quebec, in all giving them three more seats. In eastern Quebec, the PQ leads with 46.8% and is trailed by the Liberals at 29.3% (-2.8). The Liberals are down three seats, two of them going to the PQ and one to the CAQ, which is up 1.3 points to 18.1% in the region.

The Liberals did improve their standing in Quebec City, however. They are up three points to 36.1%, widening the gap between them and the CAQ. François Legault's party is up 0.8 points to 33.6%, but the Liberal gain has given them an extra seat. They are projected to win six to the CAQ's four and the PQ's one (they slipped 1.2 points to 23.3%).

The CAQ also saw their fortunes improve in central Quebec, as the party picked up 3.7 points to hit 29% and six seats, a gain of one. The Liberals dropped 0.5 points to 29.4%, giving them a very narrow edge over the CAQ, but they also dropped one seat to only two. At 34.6%, the PQ leads (though they dropped 0.6 points).

Worrisome for the Liberals is that they have fallen to third in the polls in certain regions. The projection adjusts polling results slightly, but in terms of the unadjusted average the PLQ now trails the CAQ for second place in central Quebec and the Montreal suburbs, and has fallen from first to second in Quebec City. The superior electoral machinery of the Liberals, however, should be able to make the difference. 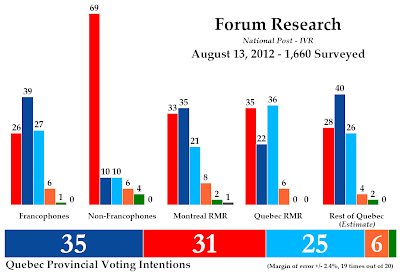 Forum's latest poll for The National Post generally shows the status quo from the polling firm's perspective, as no party has seen its support shift to a statistically significant degree. The PQ has widened their lead (and it is a lead just outside the margin of error) to four points, picking up one point to hit 35% while the Liberals dropped one to 31%. The CAQ slipped one point to 25%, while Québec Solidaire was steady at 6%.

None of the regional variations appear to be important, suggesting that voting intentions in the province are generally solid. The PQ holds a statistically significant lead on the south shore and among francophones, however, while the Liberals are well ahead among non-francophones.

Forum includes a question on whether voters are enthusiastic or not to cast their ballot, a possible proxy for people who are likely to vote. There isn't a huge difference in voter enthusiasm between the parties, but the PQ does have the edge. If we look at the "very enthusiastic" totals, we get a vote share of 39% for the PQ, 31% for the Liberals, and 22% for the CAQ.

Three riding polls have also been released over the last week, all by Segma Recherche. The first, for the riding of Granby, found the CAQ at 49% to 24% for the PQ and 16% for the Liberals. This was very close to the projection at the time, which gave the CAQ 49% to 23% for the PQ and Liberals.

Two polls today in the Saguenay-Lac-Saint-Jean region found the PQ in good standing, as the projection did. The PQ scored 59% in Lac-Saint-Jean and 53% in Chicoutimi, and were trailed by the Liberals and CAQ in a close tie for second. The Liberals had 21% in Chicoutimi and 17% in Lac-Saint-Jean, while the CAQ had 19% and 18%, respectively. The projection did give the PQ a wide margin of victory, but interestingly it was over-estimating Liberal support, mostly to the detriment of the CAQ.

But if the polls are under-estimating Liberal support we could see them be much stronger than expected on election night. This is what the projection model assumes with its adjustment mechanism for turnout, but there is always the possibility that the incumbency advantage will be especially strong in this election.
Posted by Éric at 2:50:00 PM