PQ in precarious majority position as CAQ moves up

On Saturday, Le Journal de Montréal released the latest set of numbers from Léger Marketing suggesting that the Parti Québécois was still comfortably in the lead. More significantly, however, the poll indicated that the Coalition Avenier Québec has moved into second, ahead of the governing Liberals. A poll this morning for Le Soleil by Segma Recherche also points to Liberal woes, in this case in Quebec City. But a few riding polls released over the last three days suggest that the Liberals do still have some staying power.

The projection currently awards the Parti Québécois 34% support, with the Liberals trailing at 29.4% and the CAQ at 25.6%. Québec Solidaire, with 6.8% support, is well behind the three frontrunners.

The PQ is projected to win 67 seats, giving them four more than the bare minimum needed for a majority government. With 33 seats, the Liberals would form the Official Opposition while the CAQ would claim 24 seats and QS one.

But this order of finish is far from certain. If an election were held today, the PQ could emerge with a minority or a majority, as the range puts them between 52 and 78 seats. Though the PQ's minimum ties with the Liberals' maximum, it is extremely unlikely that the two parties would end up equal in seats.

The Liberals should be more concerned with not finishing third, as the range puts them between 26 and 52 seats. That means they overlap with the CAQ's 12-32 seat range, and with François Legault claiming a tiny bit of positive momentum to Jean Charest's negative trendlines, the odds are good that the CAQ could be in second place by the time the election rolls around.

The Liberals only lead on the island of Montreal, though it is the widest lead in any region in Quebec. The Liberals have 46.2% support in the projection on the island, compared to 26.1% for the PQ and 13.6% for the CAQ.

Legault's party, on the other hand, claims two leads. He is ahead in Quebec City with 36.5% support, trailed at length by the Liberals at 28.4% and the PQ at 25.1%. And in central Quebec, the CAQ is narrowly ahead with 33.2% to the PQ's 31% and the PLQ's 26.1%. It is a close three-way race, but the Liberals get the worst of it: the PQ is projected to win 10 seats in the region, with the CAQ winning nine and the Liberals only one. 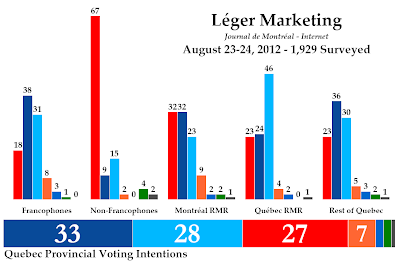 The Léger poll from Saturday was eagerly awaited, as the only available set of numbers came in the form of the widely lampooned Forum Research poll.

Rather than a big swing in favour of one party or another, Léger found things to be relatively stable since their poll of Aug. 13-16: the PQ unchanged at 33%, the CAQ up one to 28%, and the Liberals down one to 27%.

Though the gap between the Liberals and the CAQ is well within the margin of error, making it impossible to claim with any certainty that the Liberals are in fact in third place, the psychological effect of that positioning could be catastrophic. If Legault and the CAQ appear to be the only real bulwark to the Parti Québécois, the Liberals could shed federalist support over the next few days.

While the gap between second and third was statistically insignificant, that between the PQ and the CAQ was not. The PQ also holds a significant lead among francophones with 38% (-2) to 31% (+2). The Liberals' dominance among non-francophones remains unchallenged, however, with 67% support. The CAQ is down five points to 15% among this electorate.

Though most movement was within the margin of error, some was noteworthy. Québec Solidaire was up three points in the Montreal region to 9%, suggesting the performance of Françoise David in last Sunday's debate helped her party's fortunes. The CAQ was up eight big points in Quebec City to 46%, while the Liberals were up 11 on the island of Montreal to 45%. They were down considerably in the suburbs of Montreal, however, particularly north of the city. 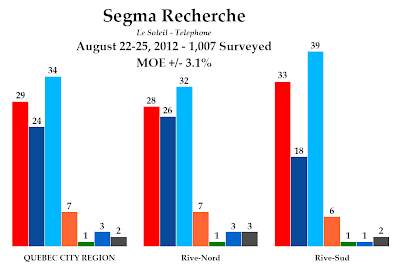 Segma's poll of Quebec City provides a little bit of contrast with Léger's numbers, though the two were taken over slightly different days (Aug. 23-24 for Léger, Aug. 22-25 for Segma).

While Léger found the CAQ with 46% support and a lead of 22 points, Segma pegged the party at 34%, five points up on the Liberals.

They both show a statistically significant CAQ lead in the Capitale-Nationale, and the results for the PLQ and PQ are within the margin of error of each poll. But it is impossible to reconcile the two results for the CAQ. The truth likely lies somewhere in the middle, but one or both of these polls is likely a little off.

Segma broke the results into the Rive-Nord (generally Quebec City itself) and the Rive-Sud (Lévis and surroundings), finding the CAQ in the lead in both areas. The area around Lévis was the last stronghold of the federal Conservatives in the last federal election, likely explaining the better CAQ results there. The PQ is much more competitive in Quebec City itself (and the projection accordingly has them in the running for four seats in the region, though one is more likely) but generally the race in and around the capital is between the CAQ and the PLQ.

There are pockets of stronger support for each party. Segma released two riding polls, taken Aug. 21-25 and using a hybrid IVR/live-caller method. In Lévis, Christian Dubé of the CAQ (future Finance Minister of a CAQ government, apparently) is in strong position with 41%, compared to 27% for the Liberal incumbent Gilles Lehouillier. The PQ trails with 18% and Québec Solidaire with 10% (a good result).

In Louis-Hébert, Sam Hamad of the Liberals has a statistically insignificant lead over the CAQ's Michel Hamel with 35% support to 30%, with the PQ's Rosette Côté not far behind at 26%.

The projection was very close for these two ridings, with Lévis projected at 42% CAQ to 27% for the Liberals and 21% for the PQ, before adding Segma's numbers to the model. In Louis-Hébert, the projection had 35% PLQ, 32% CAQ, and 26% PQ.

Two riding polls were also released over the weekend in smaller local newspapers. A poll by Cara-Télécom for La Nouvelle Union taken Aug. 21 found Claude Bachand of the Liberals to have 39.8% support in Arthabaska, compared to 32.6% for the CAQ's Sylvie Roy and 18.1% for the PQ candidate. With a large margin of error, Bachand is not out of the woods.

And a poll by Baromètre of Trois-Rivières put Danielle St-Amand back in front with 37.7% compared to 29.8% for the PQ's Djemila Benhabib and 26% for the CAQ. This is in contrast to a Segma poll from earlier in the campaign that gave the PQ a six-point lead and put the CAQ well out of the race. Again, the sample is small here so the lead St-Amand holds is not important.

Nevertheless, these two polls show that the Liberals do have the ability to hold on to ridings where they are the incumbent. Whether these numbers will hold is another thing entirely, and in consideration of the small sample sizes we can only say that the Liberals are not out of the running in these two ridings. That this is good news for the Liberals speaks to the predicament they are in.
Posted by Éric at 2:32:00 PM